The Gionee M6 was spotted listed on China mobile regulatory agency TENAA’s website after being certified by the regulatory agency. One spectacular feature of the phone is the security encryption chip it has embedded under the hood. 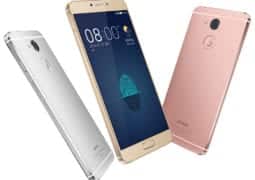 Gionee has now announced that it will make the M6 official by next week, precisely on the 26th of July in China. According to the Chinese company, the M6 will be the  one of the world’s safest smartphone on launch, as it has an encryption chip built into its panel which has the ability to protect the data stored inside the phone with encryption for personal data like documents, call records, photos, notes etc. The idea behind hardware encryption like what the M6 is touted to feature, is that it is within the device and reduces the route of potential attack the smartphone could face.

As a reminder, the Gionee M6 sports a 5.5-inch Full HD 1080p AMOLED display and is powered by a 1.8GHz octa-core Snapdragon 652 chipset with 4GB of RAM and 32GB of expandable internal memoryThe phone has an all metal body design and features a fingerprint scanner at the back. The device also promises users a massive 5,000mAh battery.

Gionee is expected to announce the M6 alongside the Gionee M6 Plus at the same event.

A recent teaser has revealed that the Gionee M6 Plus will cram a mammoth 6,020mAh battery under its and as earlier hinted, it would launch alongside the M6 come July 26.