Recently, Glo revisited their data plans and reduced all their data volume by slashing them into two without informing his customers about the update. 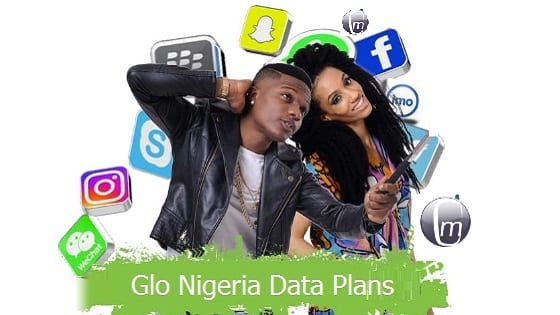 The 50% cut in data volume has an effect on both the 4G and 3G data plans, so it does not matter which one your prefer. The slash brings Glo’s data plans down to the same level as what you can get from any of the other members of the Big 4 networks. For example, N1,000 on MTN or Airtel will get you 1.5 GB of data, while N1,000 on Glo will give 1.6GB of data. But after considering network speed and strength, going for either MTN or Airtel will be a sagacious choice.

I already had my mind made up to go for another better network since Glo has a very poor one; I can say I have been managing Glo and would either go for MTN or Airtel now since the difference is just 100MB or any other better network.

However, a GLO subscriber later showed concern and took to Twitter asking them the reason why data volume has to be reduced, and this is what Glo NG said as seen in the image below; 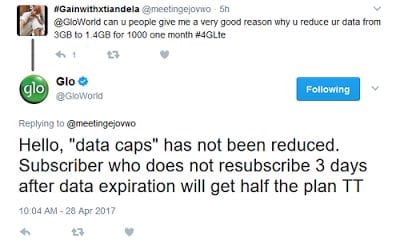 Hello, “data caps” has not been reduced. Subscriber who does not resubscribe 3 days after data expiration will get half the plan TT

I hope you understood what Glo said up there? Alright, I’ll explain to you.

What this means is that for those that still has an active plan and auto-renewal not cancelled will still enjoy the previous data volume.

If you in any way cancelled Auto-renewal of data, kindly SMS “ACCEPT” to 127 to restore your auto renewal if it has been cancelled. Then, subsequent subscription to that plan will automatically take you back to the old data volume.

The thing is, you must re-subscribe immediately so that you can enjoy the previous data capacity. If you don’t re-subscribe three days after data expiration, you will get half the old data volume.

The strategy is just to lock in their loyal customers. The policy is just for the customer to stick to their Network.

Response from GLO above made me reconsider re-subscribing to another Glo plan, which I later did. My old data plan was to expire in seven days time, so I top it up with a N2,500 subscribe to see what would happen, but things didn’t go the way I expected. I was given just 5GB while expecting 10GB of data.

Did you experience the same problem too after re-subscribing manually or through the auto-renewal process? Kindly leave a comment below.