Today, we’ll be taking a look at the Kim Fly Master M6 smartphone. When you speak of smartphone manufacturers, the number of oddly-named OEMs never seem to run out.

However, one thing I’ve learnt is that you shouldn’t dismiss any phone manufacturer without taking a look at what they have to offer. This brings me back to the Kim Fly Master M6 smartphone. This device is an entry-level device with average specifications.

To cut to the chase, let’s see what makes this smartphone from a not-so-popular name in the mobile world has to offer. 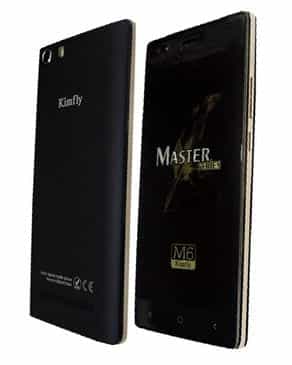 Introduced in December 2016, the Kim Fly Master M6 comes in a dainty package. The Kim Fly Master M6 uses a single SIM card, has a micro-SD slot for memory expansion among others. This smartphone is pretty slim at 8.6mm. The Master M6 is no doubt a low-end device as already stated.

The display is a 5.0 inch IPS LCD capacitive display with a resolution of 480 x 854 pixels. The Master M6 comes available in three colour variants of grey, white and gold.

Internal storage for the Kim Fly Master M6 is 8GB and a scrimpy RAM size of 512MB. This combination should suffice for the basic application needs, although you would be disappointed when running multiple apps at a time.

For processing, there’s a 1.2GHz Quad-core MediaTek processor. This is backed by a Mali GPU for graphics processing. The Kim Fly M6 runs on Android 5.1 Lollipop out of the box with no option to upgrade. However, the user has access to millions of games and apps available for download on the Google Play Store.

For the photography enthusiasts, this device would surely disappoint as it comes with a 2.0MP front camera and a 5.0MP snapper at the rear. In an age where manufacturers are releasing phones with at least 8MP rear camera, Kim decided to stick with a low-res 5.0MP camera.

The Kim Fly Master M6 packs a 2800mAh battery for at least a day’s usage on average use. The battery life is quite adequate for taking you through a day (if you are an average user).

The Master M6 comes with a range of connectivity options including Bluetooth support, WiFi, and 3G connectivity.

You can get the Kim Fly Master M6 smartphone from major online stores at the price range of between N27,000 to N32,000.

At a time when manufacturers are releasing devices with impressive features, and when customers are looking for more from smartphones, the Kim Fly Master M6 would be lucky to survive in the market. Although if you are not a power user or you are looking for a side phone, this device can be a nice choice.