The LeEco and Coolpad collaborative device which was spotted on TENAA few days back has been teased by the company to adopt the moniker Cool1. This was revealed via a series of posts on China’s microblogging website Weibo. 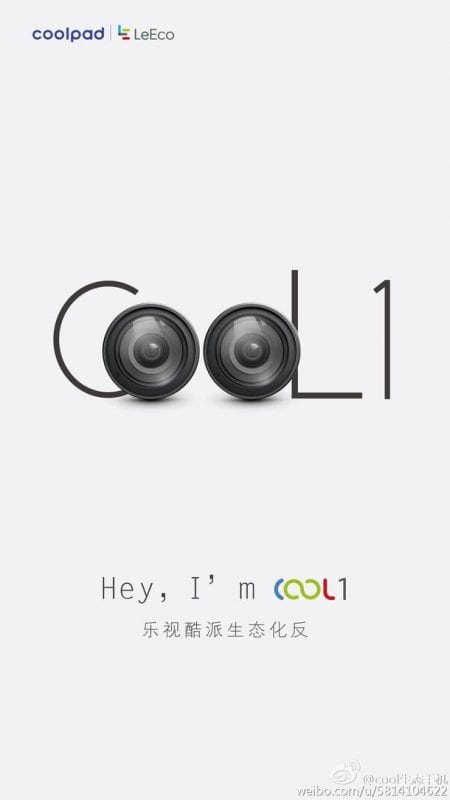 The smartphone had earlier on been featured in a leaked photo of an unidentified lady holding the phone as if trying to take a selfie snapshot. The leaked photo revealed the rear view of the device as well as some features on the back. From the leaked photo we were able to gather the device will join the growing list of flagships sporting dual main cameras and it also features a fingerprint sensor on its back.

The Cool1 was also sighted on Chinese telecoms regulatory agency TENAA’s website, where more photos of the device as well as few specs were disclosed. the device was listed with the model number C106 on TENAA.

The TENAA listing shows the Cool1 will feature a 5.5-inch display with a whooping 2k display. The listing also reveals the Cool1 will feature 4GB of RAM and 64GB of on-board storage space which is said to be expandable up to 128GB. The device will also be powered by a Snapdragon 820 processor according to earlier rumors but the processor type wasn’t captured on the TENAA listing.

On the camera specs, the Cool1 has a 13 megapixel dual pixel rear camera with LED flash and up front there’s a 5-megapixel sensor. The smartphone also features a fingerprint sensor at the back.

Apart from the TENAA listed specs, the Leeco/Coolpad Cool1 is also said to feature a cool 3500mAh battery and is speculated to run on dual operating systems. That means that the Cool1 will boot both LeEco’s EUI OS and Coolpad’s CoolUI both based on Android 6.0 Marshmallow, a scenario which would see users having the option of switching from one OS to the other depending on their choice.

The LeEco/Coolpad Cool1 is tipped to get an August 10 release date but that has not been officially announced. Also there is no news yet about the price the smartphone will carry.