Apple, on the occasion of WWDC 2018, has left dry users waiting for a renewal of the line of MacBook laptops. Something is boiling, however, as the database of the well-known benchmark, Geekbench suggests, in which an unprecedented MacBook Pro 15, equipped with an Intel Core i7-8559U CPU (Coffee Lake U), has peaked in the past few hours.

Before advancing hypotheses on the type of MacBook (15 “or 13”?), Remember that the reference to “15,2” contained in the model name detected by Geekbench does not indicate the diagonal of the display, but the series. A 15 series model, x refers to an unprecedented line-up compared to those produced so far  – at the moment, the 15 “and 13” MacBook Pro 2017 (with four or two Thunderbolt ports) are identified as MacBookPro 14.3, MacBook Pro 14.2 and 14.1 (see HERE ).

Given that it does not seem to be a prototype made with a MacBook Pro already on the market, the news focuses on the CPU – the Intel Core i7-8559U was introduced in the second quarter of 2018, and is the most powerful model of the Coffe line of processors Lake U. Made with a 14 nm production process , the CPU has a quad-core / eight-thread architecture, and operates at a base rate of 2.70 GHz that can reach 4.50 GHz in Turbo mode. The 8MB of L3 cache memory and a 28 Watt TDP complete the picture.

Geekbench also refers to 16GB of RAM  – detected as an LPDDR3 – and MacOS 10.13.6operating system, which is the latest beta of MacOS High Sierra released in recent hours. 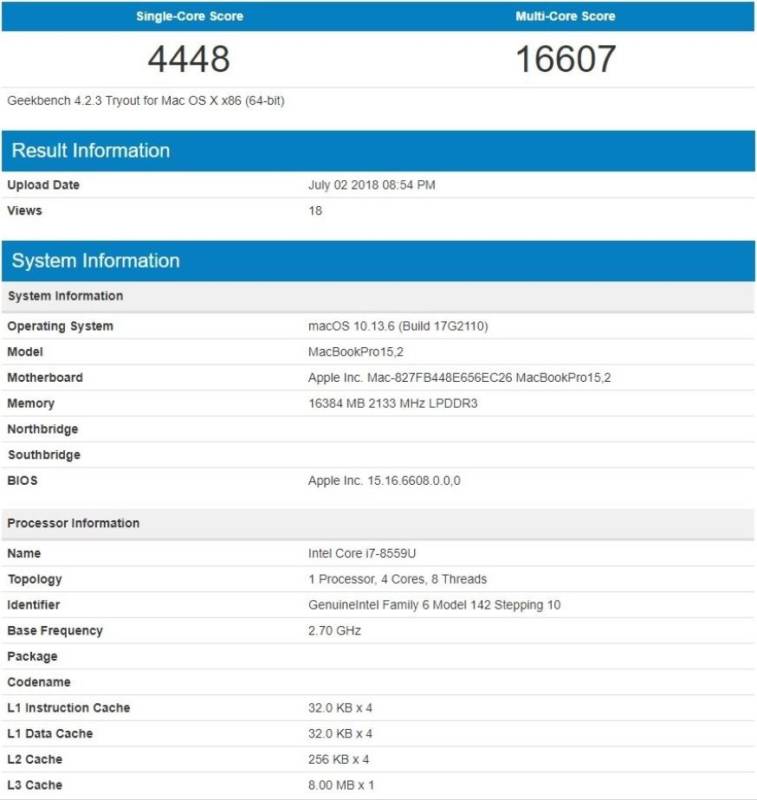 These are the main data that can be deduced from the Geekbench database pending further confirmation. The renewal of the line of MacBook laptops could be the perfect springboard to introduce the next major release of the desktop operating system of the Cupertino house, Mojave, expected in September in a stable version.