The Motorola Moto G8 Play is affordable for the Moto G8 smartphone. The phone is for those that don’t have enough cash to grab the Moto G8 Plus or G8. The good news is that it still maintains the beautiful body design of the original, just that the display and the RAM have been reduced.

Table of contents: show
1 Motorola Moto G8 Play Key Specs And Features
2 Design And Display
3 Camera Features
4 Hardware And Software
5 Storage Capacity And Sensors
6 Battery Power And Network Connectivity
7 Motorola Moto G8 Play Full Technical Specification
7.1 General
7.2 Network
7.3 Design
7.4 Display
7.5 Camera
7.6 Software
7.7 Hardware
7.8 Connectivity
7.9 Battery
7.10 Media
7.11 Other Features
7.11.1 ==> Disclaimer: Specifications, Features & Price Shown For The Above Device Was Entered Manually. We Can Not Guarantee That The Info On This Page Is 100% Correct. If You Think That Any Information For The Current Device Is Wrong Or Missing, Please Don’t Hesitate To Contact Us
8 Motorola Moto G8 Play Price And Availability

The Moto G8 Play is a budget device and as such, it’s likely built with a glass and a plastic frame. The handset packs a smooth panel where you will find the camera set-up, the LED flash, and the phone branded logo.

The fingerprint scanner is on the back underneath the logo. The Moto G8 Play has a screen display size of 5.7 inches with an IPS LCD capacitive touchscreen. The screen has a resolution of 720 x 1520 pixels, a 19:9 ratio, and 295 PPI density. It also comes with display protection.

As far as the camera is concerned, the maker put a triple camera set-up on the phone. It has an impressive 48 MP main shooter with a helper of 16 MP ultrawide camera and lastly is 5 MP for depth photos. 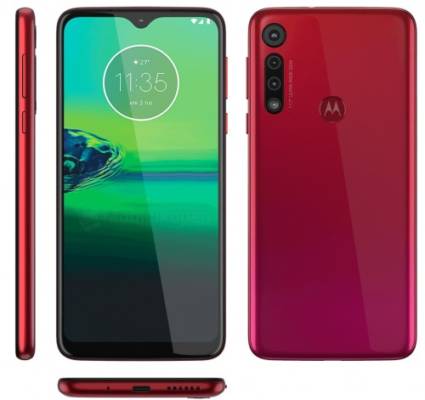 For the sake of performance, the maker equipped the Moto G8 Play with a Mediatek MT6771 Helio P70 chipset based on 12 nm process technology. The octa-core processor on the inside is handling its assignment at a speed of 2.0 GHz. It has Mali-G72 MP3 for graphics related issues and gaming.

The inbuilt storage on the phone is 32GB with 3GB RAM and another with 64GB and 4GB RAM. You can still expand the memory with a micro SD card. The sensors available on the handset are Fingerprint (rear-mounted), accelerometer, proximity, and compass.

The Moto G8 Play has a nonremovable battery capacity of 4000 mAh with fast charging technology just like it’s siblings. It also comes with dual SIM which has support for 4G LTE Network. Other connectivity options on the inside are Wi-Fi 802.11 b/g/n, hotspot, Bluetooth, A-GPS, GLONASS, BDS, GALILEO, FM radio, and micro USB.

The Motorola Moto G8 Play is not yet available for purchase, however, when available, it’s expected to sell for $125 depending on the model. You can get it in amazing colors variant as well.