Oga Taxi unveiled a brand new ride-hailing app – apart from having a completely reimagined user interface, the app now supports the social ride-pooling feature. Passengers can choose between a classic (solo) and a pooled ride, the latter guarantees a discount of up to 40%. If opting for a pooled ride, users get to choose with whom they will ride – the sophisticated matching algorithm will suggest profiles of people going roughly the same way. 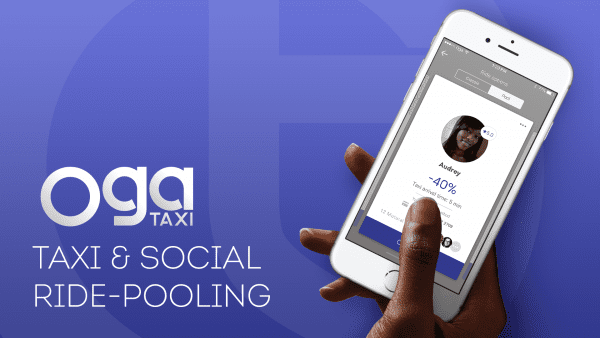 “We wanted to introduce pooled rides and at the same time address the most common problem with them, which is that passengers do not know who their fellow passenger will be. By introducing social ride-pooling we hope to address this issue, and finally give passengers choice.” says Michael Nnamadim, CEO of Oga Taxi.

The new Oga Taxi app was developed by Splyt, the London-based startup developing technological solutions for ride-hailing companies all over the world. The new Oga app also supports Splyt global roaming API, that enables cross-bookings between companies using the API. For example, upon arrival to Abu Dhabi, existing user of Oga Taxi will now be able to book a ride directly through the Oga Taxi app, the ride will then be operated by Careem, company that has also integrated the API. Just as well, users of other apps will be able to book a ride directly through their local app and have their ride operated by Oga Taxi.

At the moment, Splyt global roaming API is integrated by Careem, operating in over 50 cities in the Middle East, Yidao, covering 130 cities across China. Partners in Europe include iTaxi, that is operating in 150 cities in Poland, French Taxis Bleus and Belgian Taxi Verts. The technology is currently live in 340 cities across 4 continents, thus creating a powerful network of local and regional taxi apps.

After unveiling the new app and introducing new features Oga Taxi is planning to expand its coverage. The company is now actively attracting drivers in Abuja, Lagos and Port-Harcourt with more cities in Nigeria to come soon.

Oga Taxi is West Africa’s premier community focused taxi app. Oga Taxi was founded by Michael Nnamadim and AmehIdoko in June 2014 with headquarters in Abuja, Nigeria. Oga Taxi is currently operational in Lagos, Abuja and Rivers, working with individual drivers and taxi fleets. Oga Taxi aims to expand to more cities in West Africa with focus on creating a system that provides equitable fare rates for both the passenger and driver.