Entering the drone market this month is the Parrot Mambo drone with the First Person View (FPV) that gives the best flying experience from the ground. With the addition of a camera and the Parrot’s FPV headphone, the device offers live footage in real time as it flies. The plastic drone is light and sleek with a camera mounted on top to give you live reconnaissance action as it flies in the sky. The Parrot Mambo FPV is small enough to fit in your palm and its the closest thing you can get to a pilot experience. 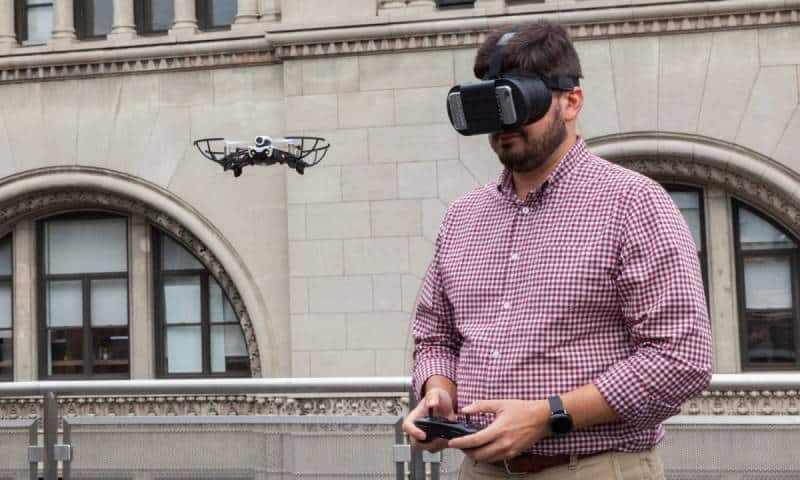 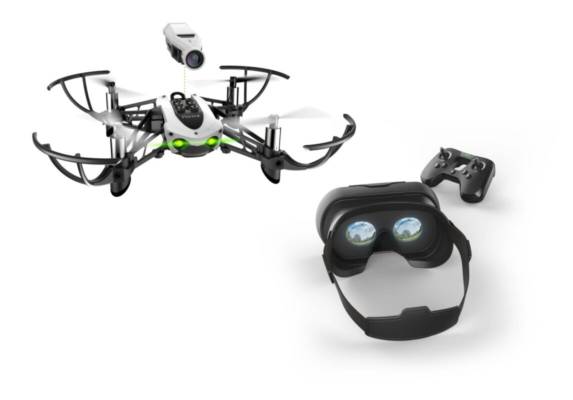 The Parrot Mambo FPV comes with a first-person view quad, and there is a new attachable 720P HD camera on top of the modular Smart Block socket which is capable of recording directly to the MicroSD card or live-streamed to the FreeFlight Mini app. The FreeFlight Mini app is used with the Parrot Cockpitglasses 2 FPV headset to give live reconnaissance.

The HD camera on top is capable of shooting 720P resolution video footage which can be streamed to the Parrot FPV headset and with a 120-degree field. It also has a field view of 96 degrees and makes flying easy especially indoors. With its Transformer-y design and game console like controller, the Parrot Mambo surely looks like a toy however it is recommended for its user to be 14years old or above. Parrot Mambo FPV is a very small sized mini-drone that fits right into your hand with two green LED eyes in front. The body has a white plastic panel with four plastic limbs which extend to the side and carries the rotor blades. The plastic rotor blades can be bent back to shape which can happen when the drone is flown at high speed into the wall and get it flying again. It also comes with spare blades in the pack, and you can purchase blade protector if you are expecting few crashes.

The headset has a collapsible design which makes it easy to carry about when not in use and fits easily into your backpack. You just simply fit your phone into the headset and adjust the lenses and you are good to go. Although your experience depends on the phone you are using and its screen resolution. Also, the see-through feature comes in handy when you want to see through your phone’s lens. It’s convenient and can even sit on your prescription glasses with adjustable lens for pupillary distance to give the best viewing experience.

The mini-drone has a top speed of 30km/h with three different piloting drift, easy and racing and a Parrot Flypad controller with a range of up to 330 feet. It has a battery life of time of 10 mins in flight without the camera and 8 mins with the camera. A nice mini-drone at its price and a nice toy to play with and the accessories are top notches.