Samsung plans to launch this year, a new mid-range smartphone, it is the Samsung Galaxy A6. Recently two variants of this device were detected on Geekbench; now the device has been certified by the Wi-Fi Alliance. This official certification confirms its existence and lets us know that it will probably be launched soon.

Unfortunately, Wi-Fi Alliance did not disclose any of the specifications of this device, so it is still shrouded in mystery. But the model number and operating system have been revealed, so it is possible that we can better identify the phone in the next leaks. 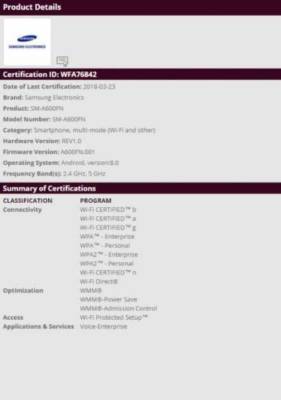 According to Wi-Fi Alliance, Samsung Galaxy A6 has the model number SM-A600FN and has the Android 8.0 Oreo operating system. No more information has been revealed, but thanks to the previous Geekbench filtration we already know some details about its specifications. Although it will be called A6, according to Geekbench it will have low-end specs than the Galaxy A5 (2017).

Under the hood, the phone has a Samsung Exynos 7870 SoC octa-core that is also present in the Galaxy A3 (2017) and some devices in the Galaxy J series. Samsung Exynos 7870 is an octa-core chipset composed of eight CPU Cortex -A53; it also includes a Mali T830 MP1 GPU. The SoC will be paired with 2 GB of RAM, while internal storage is not yet known. 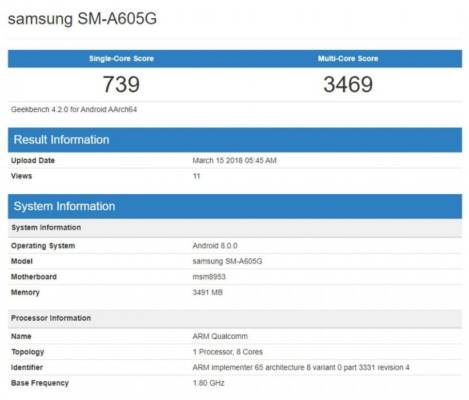 At Geekbench, the Samsung Galaxy A6 scored 723 points in single-core performance and 3605 points in multi-core. According to the benchmarking platform, a Plus version of this device will also be launched and will carry the code name SM-A605G. Unlike the standard version, this one seems better than the Galaxy A5.

The A6 Plus will feature an octa-core Qualcomm Snapdragon 625 processor unlike most of Samsung’s average ranges, and 4 GB of RAM. But the score obtained in Geekbench is strangely even lower than that obtained by the A6 (739 in a single core and 3469 in multi-core).

For now this is all the information we can share with you, however we will be alert to any news that leaks from this new Samsung device. We invite you to follow it closely with us.