That Samsung is working on a foldable cell phone is no longer a secret, the big question that lingers, however, is how exactly this device will work – after all, what will be the technology implemented on the flexible screen to support day-to-day usability without significant problems in hardware or design?

This controversial smartphone that currently addresses only by the name of Galaxy X continues to generate more doubts than answered in the Android community, and we can not state with full conviction whether it will be targeted to the elite segment or intermediary, although other manufacturers beyond the Samsung is also eyeing this strategy for next year – a device that folds as a mere book.

This week, a new patent registration granted to Samsung by the US Patent and Trademark Office (USPTO) may have revealed the complete design of this Galaxy X, which essentially still inherits the Galaxy S and Note generations, but also points out a new horizon for the South Korean brand – check out: 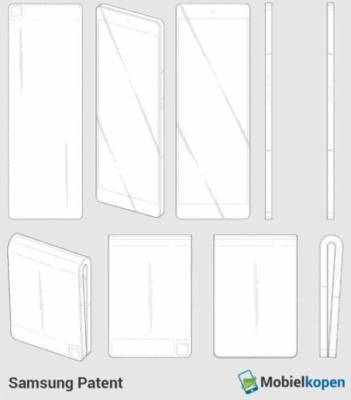 There is no physical button on this phone, and likewise, no digital fingerprint reader appears in the design. This means that the Galaxy Nexus should use a facial recognition technology to unlock the device, something like Face ID on iPhone X from Apple.

At the top edge, there is a space for the front camera, while the main camera is in the upper left corner on the back of the smartphone. Keep in mind that the image is not distorted, this is an exact representation of the smartphone in the official patent.

READ ALSO: Samsung W2018 is a flip smartphone with two displays and a Snapdragon 835 processor

According to the December reports, Samsung should introduce its first foldable smartphone in 2022. Many sources claim that this foldable cell phone will be made official with the model number SM-G888N0, which is the same code that has already appeared in some certifications in South Korea.

It is worth remembering that the support page of the Galaxy X is already available, corroborating the imminent launch of this cell phone in the near future.