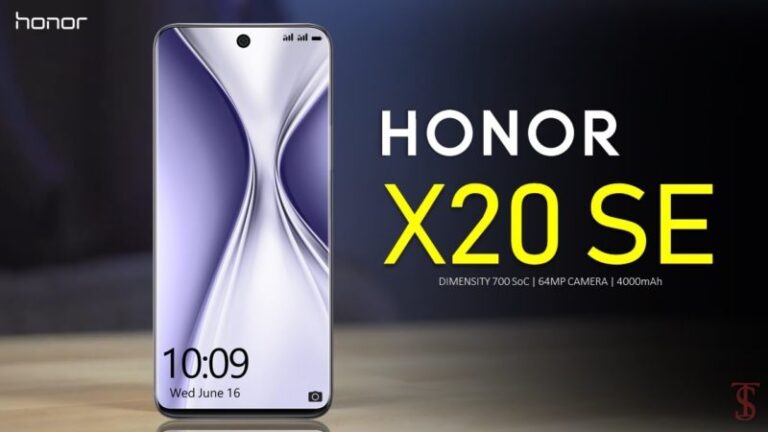 The Honor X20 SE is a device that’s very suitable for playing games, watching movies or other video content, browsing the internet, and doing other things all smartphone users take for granted. Users have lauded the high-density display which makes the display so clear and bright. That display is also easy on your eyesight.

The smartphone was announced in the month of June 2021 and is expected to be released sometime toward the end of July 2021.

It comes with an IPS LCD display. The aspect ratio is 20.9 and the PPI density is 399. The resolution is 1080 x 2400 pixels but sadly, the screen has no Gorilla glass for protection. The size of the display is 6.6 inches.

The main camera is a huge 64 MP (Wide) PDAF lens, while there are others such as the two 2 MP lenses; one is macro, while the other depth. Other features inherent in the camera are LED flash, HDR, panorama, gyro-EIS, and more.

The selfie camera is 16 MP. You could see a punch hole for it at the front of the device.

It is at this point you’ll notice that the Honor X20 SE comes in two variants of 6 GB and 8 GB at the RAM, while the internal storage is 128 GB. No card slot in this smartphone.

MUST READ ⇒  Body temperature is measured with a "Huawei" phone

The operating system of the Honor X20 SE Android 11, coming with Magic UI 4.0. It is not going to have any Google Play services at all. However, looking at the CPU, we see that it is Octa Core. For both variants, these are also different. The good thing is that these are good quality because one is 2×2.2 GHz, while the 6×2.0 GHz. 7nm MediaTek Dimensity 1200 5G is the chipset inside the device.

The smartphone is a 5G device. In the absence of that, 3G or 4G will operate on it.

We can reveal that the price of the Honor X20 SE will be approximately $280.

The smartphone is powered by a Li-Po 4500 mAh battery that is equipped with fast charging. The battery is non-removable.

Other Features of Honor X20 SE

The device will arrive in colors black, green, rose gold, and silver. It is equipped with the following- GPS, Bluetooth 5.1, 3.5mm jack, a loudspeaker – though we can’t tell how great the sound will be. There are several sensors in the device, such as fingerprint, compass, proximity, and others. Take note that the fingerprint is side-mounted. It is not at the rear or in-display.

The Honor X20 SE is a smartphone that was made by the manufacturer to cater to features that matter. That’s why you will not find such features as NFC, Radio, or infrared port in it. Take note that if you purchase this phone there won’t be Google services on it. That means it does not have some annoying apps that Google forces on Play Store. As the user, you can and choose what you enjoy. The price too is good. No wonder, it comes as a plastic-body phone.