Google has added a new gesture-based account switcher in some of its mobile apps. With this feature, you can swipe between your various Google accounts. In this guide, we will show you how to use it in Gmail, Google Maps, Drive, and more on Android and iOS devices.

Google announced the new account switcher at the Google I/O 2019 developer conference, and it replaced a sidebar menu which was well looking outdated. Now, you no longer need to tap on a hamburger menu icon and then dig through a drop-down menu to switch between your Google accounts as you can now do this straight from the app’s home screen.

Before you can use the new account switcher, you need first to make sure that you are signed in to at least two Google accounts on your mobile device. If you are using an Android device, you can do this from your device’s settings menu while iOS users can do this from the Google app.

Once that’s settled, launch the Gmail app on your device ( or one of Google’s other newly updated apps).

Now, you should see your account’s avatar on the right side of the search bar. Swipe downwards on the avatar to quickly switch to the next account.

From the GIF above, you can see that quickly swiping down on your account’s avatar will cause it to switch to the next Google account on your device. Unfortunately, as far as we know, there is no way to adjust the order in which the accounts are arranged manually. Just keep swiping downwards until you get to the account you want.

To gain a little more control over this feature, you can tap on your avatar, and all your accounts will be displayed. A menu will appear for switching and adding accounts as well as managing the ones already on the device. 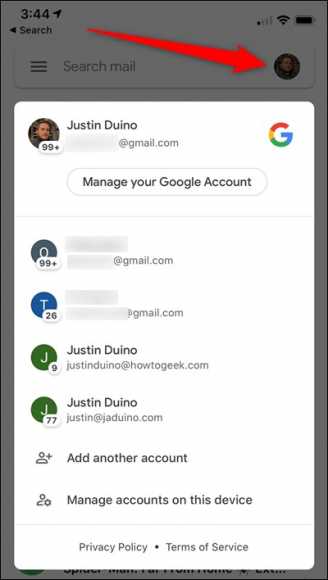 Right now, Google has added this feature to the mobile apps of Gmail, Google Maps, and Drive on Android, iOS, and iPadOS. The account switcher has also been added to the new Contacts app on Android.

According to Google, it will bring the new account switching feature to more apps over the next few months. Although we expect that this feature will be introduced to most of the company’s apps, it has confirmed that YouTube, Chrome, Google News, and several others should see the feature by the end of summer this year.