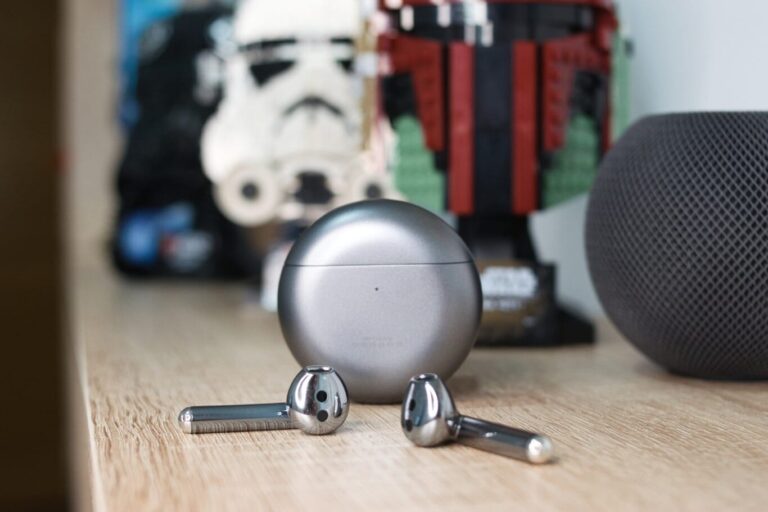 We start with the external section, which we can summarize without problem with a phrase- they are more completely wireless headphones. Their design is similar to Apple’s AirPods and that’s not necessarily a bad thing, they just don’t add anything new.

Each earbud weighs 4.1 grams, a little less than the FreeBuds 3 (4.5 grams) and, in our case, they are a shiny silver color that gets dirty just by looking at it. It is not a problem because it is not a mobile that we will be using all the time, but it does not hurt to comment on it.

Spread throughout the body we have the microphones, the position sensor, the windproof conduit and the touch surface, whose use is intuitive. The touch of the headphones is great. You can tell that they are made of plastic, but the finish is good, without more.

When it comes to ergonomics, I have a mix of sensations. Being open and not having silicone pads I am always alert, to say the least, that they are going to fall off. But no, they don’t fall off. The headphones stay well fixed to our ear without problem, although they are not as, as, as comfortable as the FreeBuds Pro.

What they are is light. A lot. We hardly notice that we are wearing them and that is appreciated on a daily basis. This is something that we could already appreciate in the FreeBuds 3 and that is now even better in the FreeBuds 4 thanks, as we said, to that weight reduction (subtle, but appreciable, yes).

The case, meanwhile, weighs about 38 grams and is made of a well-worked plastic that is not as shiny as the headphones, fortunately. It is completely circular and you can hardly feel it in your pocket, something positive when it comes to transporting it on the street. Unlike what happened with the FreeBuds Pro, which were devilishly difficult to remove from the case, the FreeBuds 4 are removed without problem.

The case has an LED on the front, the USB Type-C port on the bottom and, if we pay the extra 20 euros for the version with wireless charging, the base on the back. They also have a button in the right area that could already have some type of relief or delimitation, because it is difficult to find just by touch.

Experience- straight to the point

We thus go on to talk about the experience, which is the section in which we contemplate the additional functions. But first of all, let’s talk about compatibility. The FreeBuds 4 use Bluetooth 5.2 and are compatible with iOS and Android through the AI ​​Life app (Google Play / App Store). They have a dual connection, so we can have them connected to two devices and switch between them without major problem.

AI Life couldn’t be easier. It is an app that goes straight to the point and that allows us to do what is right and necessary, for good and for bad. From the app we can see the battery of the headphones and the case, access the connection center (to manage the dual connection), activate or deactivate the ANC and HD calls, modify the gestures, search for the headphones, activate or deactivate the detection position and update the firmware.

It’s funny because the app changes depending on whether we use the iOS or Android version. The Android app does not allow us to modify the noise cancellation mode (general or comfortable), while the iOS one does. The same happens with the equalizer effects (amplification of bass and treble), which are not in the Android app, but are in the iOS version.

What do we lack in the app in both cases? An equalizer. It is true that the headphones are well equalized from the factory, but it would be a detail to give the user the option to modify the frequencies to adapt the music reproduction to their own tastes.

With that said, let’s talk about gestures. The headphones detect them well and during our tests we have not suffered from ghost touches. Now, the options seem somewhat scarce, since we can only modify the behavior of the two touches and we do not have actions with one touch. The ones we have available are the following:

By default, the headphones are not configured to activate the voice assistant, but we can modify the two-touch gesture of one of the headphones to do so. Thus, by giving two taps we can invoke Google Assistant or Siri and give orders, although yes, they are not compatible with hotwords (“OK Google”, “Hey Siri”).

Regarding lag, the experience has been very positive. There is hardly any delay between the image and the sound, so we can watch movies, series or YouTube / Twitch videos without major problem. We have also had no problems with position sensing, which works fast and well.

But let’s get to the important thing- how do you hear them ? For this review we have used headphones connected to an Android mobile and an iPhone in which we have listened to music, podcasts and videos. The music was always at 320 Kbps, which is the maximum that Spotify dispatches for now.

The FreeBuds 4 incorporate a huge driver inside, no more and no less than 14.3 millimeters, and the truth is that it knows how to behave. The sound of the FreeBuds 4 is really good, very balanced, one of the best, if not the best, that we have tested in open format headphones.

The bass, which usually comes somewhat enhanced from the factory, in this case they are not. The headphones are punchy, yes, but without being over the top. You can see this in any urban genre, like trap. My recommendation- ‘By my name’, by Duki. You can see that, although the bass is very marked, the headphones manage to reproduce them without bursting our eardrum.

As for the mid and bass frequencies, which are usually the most problematic in TWS headphones, the FreeBuds 4 also offer a good experience. It is not the best we have tried (in this field the Sony WF-1000XM4 are unbeatable), but we can say that they are very enjoyable. We can easily appreciate the nuances of the voice of the singers and guitars in songs like ‘Bloody Valentine’ (Machine Gun Kelly) or ‘I’m just a kid’ (Simple Plan).

According to Huawei, the headphones have an artificial intelligence system that detects the type of ear canal of each person and adapts the sound accordingly. It is one of those things that are not noticed and that we cannot control from the app.

In short, they are headphones that those who want to use them to listen to music will like. The only drawback that I can get out of them is the aforementioned lack of equalizer and that the volume at the highest levels is not as high as I would have liked. But otherwise, they are quite complete headphones.

Finally, and who is interested in the quality of the calls, say that it is cool. Our interlocutor listens to us well and we to him too, so without problem. From the app we can activate the “HD Call” mode that slightly improves the quality, but nothing special. Be that as it may, let’s keep the idea that we can make and receive calls without problem.

And without the sound quality we liked it a lot, the noise cancellation not so much. To understand why, you must first explain one thing. Noise-canceling headphones seek to isolate us from the outside and for this they have two mechanisms- passive cancellation and active cancellation.

The first is that we achieve with the sealing of the ear canal itself thanks to the silicone pads. By sealing the channel, the noise from outside can not enter, easy and simple. The second is achieved with the microphones, two in this case. The problem with these headphones is that the passive cancellation is almost completely lost because they are open.

Being open-ended, the headphones cannot prevent intrusive sound from slipping through us

According to Huawei, the headphones are capable of canceling up to 25 dB and use one of the microphones to measure the echo from the ear canal and apply one of 16 different ANC modes. They call this adaptive active noise cancellation settings, and according to the firm, it’s something the headphones do in a matter of milliseconds.

Reality? That doesn’t work as well as we would have liked. It is true that the microphones are capable of canceling some external noise, but they are not going to prevent it from escaping us. For example, I am wearing them as I write this and, although far away, I can appreciate the noise from the street when the office window is open.

Perhaps it is my habit of using TWS headphones with silicone pads, but the truth is that having tried the FreeBuds Pro and these, I definitely prefer the FreeBuds Pro. Noise cancellation is much more effective when we have the ear canal well sealed, no matter how many algorithms and microphones the headphones have.

We finish this review talking about what is probably the most improvable point of the FreeBuds 4- the battery. Inside each headset we have a modest 30 mAh battery that, with active noise cancellation activated, offers us around two and a half hours of battery life. A figure that is too low that we have to load them several times during the course of the day.

The most normal thing in headphones of this type is that they offer us about four hours of battery life with the ANC, but the FreeBuds 4 are too far below. It is true that if we deactivate this function we can scratch up to four hours, but four hours is not an outstanding battery life either. Unfortunately, these headphones are not going to make us fall in love with their battery.

The battery is, without a doubt, one of the main points of improvement of the FreeBuds 4

The case, for its part, incorporates a 410 mAh battery that allows us to charge the headphones several times (luckily) and quite quickly. In fact, the case somewhat compensates for the limited battery life of the headphones, since in 15 minutes it charges the headphones by half.

When it comes to charging the case itself, there are two options. The normal version is charged only by USB type C cable, while for an additional 20 euros we can get the version with wireless charging. In my opinion, and for a matter of comfort (and in my case, custom), I prefer the version with wireless charging, but to the taste of the consumer.

At this point, we can say that the FreeBuds 4 are very nice headphones when it comes to construction, compatibility and sound quality. They can be heard really well and will delight all those who do not like to have headphones embedded in the ear canal with silicone rubber.

However, its open format prevents the noise cancellation from finishing shining. It is noticeable, yes, but not as much, not even close, as it is noticeable in other products of the firm, see the FreeBuds Pro. On the other hand, the battery has left us with a somewhat bitter taste in the mouth, because two and a half hours they stay well below average.

If noise cancellation and battery are not a problem for us and we simply want open headphones that sound good, these sound better than all the open headphones we’ve tested so far. However, if we seek to isolate ourselves completely from the outside world and have more battery juice, it is better to consider other options.