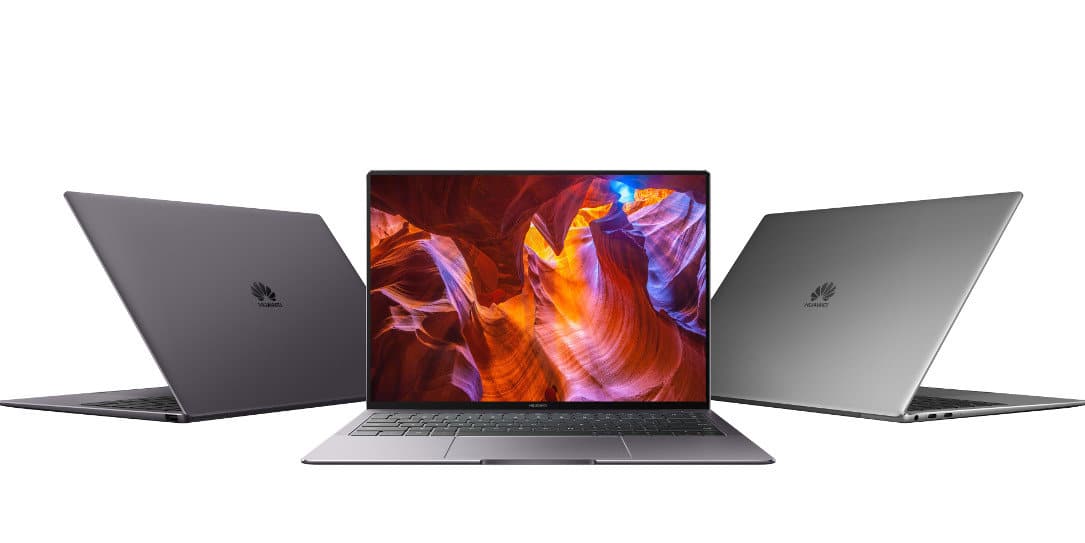 Keep reading to know more about the MateBook X Pro and to know what makes it tick.

The Huawei MateBook X Pro is a beautifully-designed notebook, no doubt about that. If I may describe it in two words, they’ll be “simply alluring.” As previously stated, this notebook comes in all of its metallic glory. At 2.92 pounds heavy, this laptop is slightly lighter than the 13-inch Apple MacBook Pro, and a bit heavier than Dell’s XPS 13. The MateBook X Pro is as thin as the 13-inch MacBook Pro at 0.6 inches.

The two halves of the MateBook X Pro are connected via a nicely-built long hinge. This design makes it possible for the user to open the lid with one hand. Opening the lid ushers you to the near-borderless display and a full-size keyboard.

The Huawei MateBook X Pro has a footprint of 12 x 8.5 inches which is fairly compact for a 14 incher.

The display on the MateBook X Pro is definitely one of its talking points. The 14-inch display has a great brightness score of about 450 nits and excellent color accuracy. The display is also a touchscreen and with a resolution of 3000 x 2000 pixels, it offers crisp and vivid viewing experiences.

The bezels surrounding the display are almost non-existent, which brings to mind the trending bezel-less displays of smartphones. 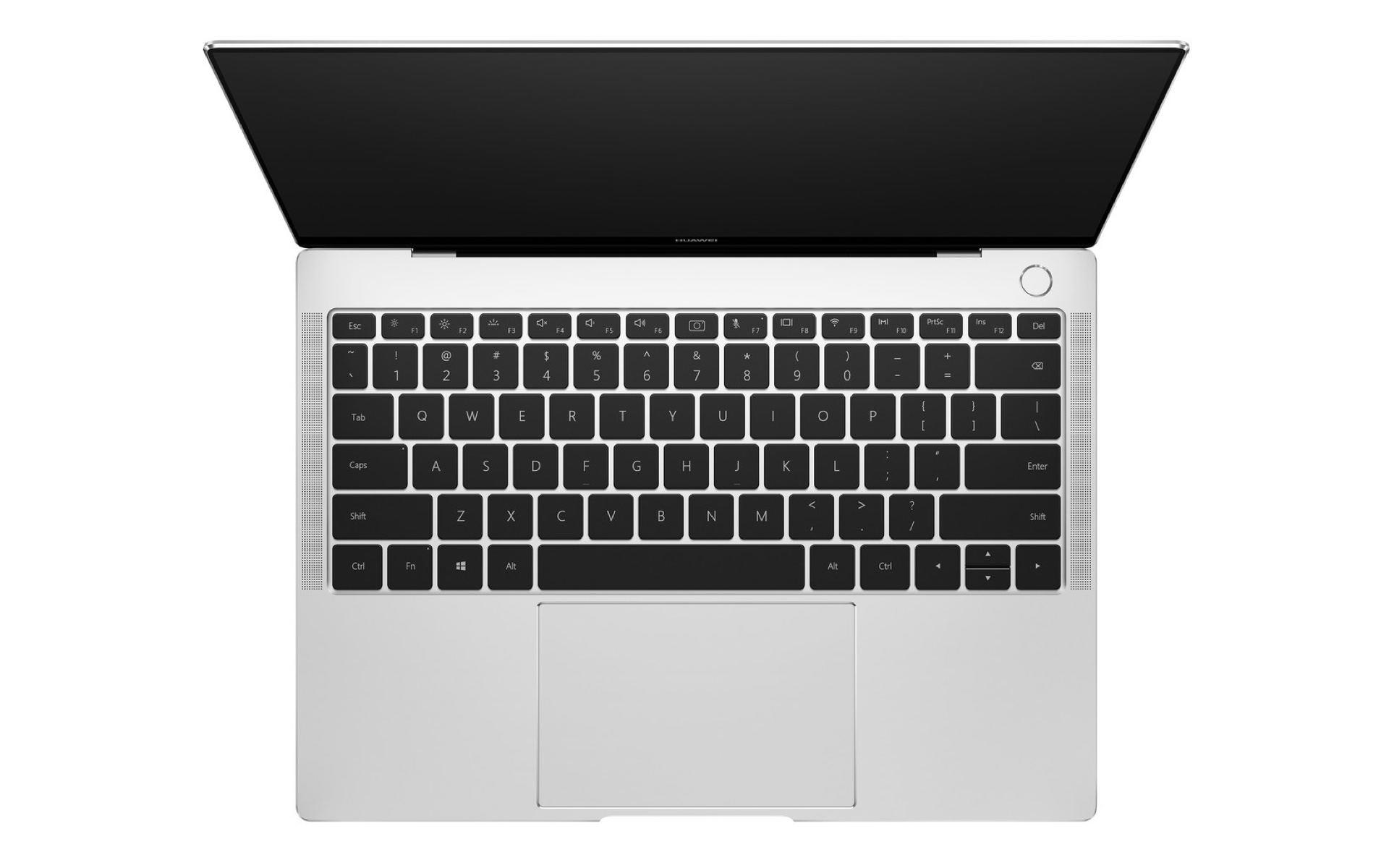 Huawei’s MateBook X Pro comes with a decent keyboard. The island-style keyboard does not include a separate number pad for maximizing the space between keys. The keys have a key travel of 1.1 mm and an actuation force of about 70 grams. This combination allows for at least comfortable typing.  Of course, the keyboard has backlighting.

Huawei fixed a large touchpad on the MateBook X Pro. The touchpad area is 4.7 x 3.0 inches and is highly sensitive with support for multi-finger controls.

There is a fingerprint scanner embedded on the power button for secure logins.

A high performing processor runs the show for the MateBook X Pro. This eight-generation Intel Core i7 CPU is paired with 16 gigs of RAM and a 512GB SSD.

Graphically, the MateBook X Pro uses a Nvidia GeForce MX 150 GPU (with 2GB of Video RAM). This midrange graphics card ensures that the notebook is able to run some of the latest AAA gaming titles.

Battery life on the MateBook X Pro is impressive as the laptop can last for about 10 hours on average use. On the lowest settings, users should be able to squeeze up to a day’s worth of battery life. 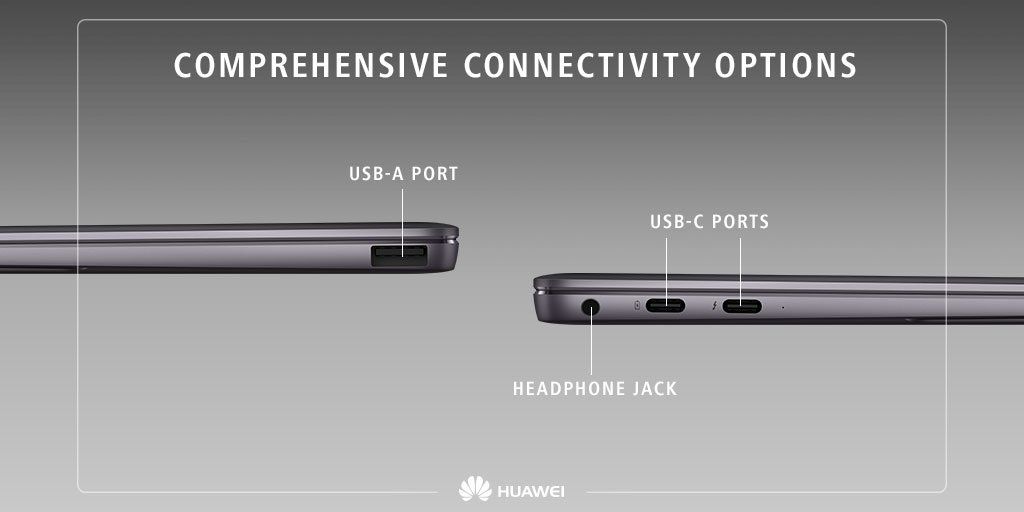 The ports on the Huawei MateBook X Pro are not so many. On the left side of the laptop is a pair of USB type-C ports (the only one supports Thunderbolt 3), and a headphone jack. The other side houses a single USB 3.0 port.

As usual, there’s the Bluetooth and Wi-Fi combination for wireless connections.

The Huawei MateBook X Pro begins at around $1200 and is available for purchase on leading stores worldwide.

The MateBook X Pro was made to be a competitor to Apple’s MacBook Pro, and it does a pretty job at that. The highlights of this device include the good battery life, near-borderless and high-res display, alluring design, high-end CPU, and ultra-portability. It even gets better when you consider its price.

All images are properties of Huawei Corp.