The Huawei MediaPad M3 is a high-end tablet with super display quality and a screen wide enough to suit all your reading and gaming needs.

The Huawei MediaPad M3 Tablet features an 8.4-inch IPS display with a WQXGA (2560 * 1600) display resolution to give you the clearest display quality you can find on a modern tablet. 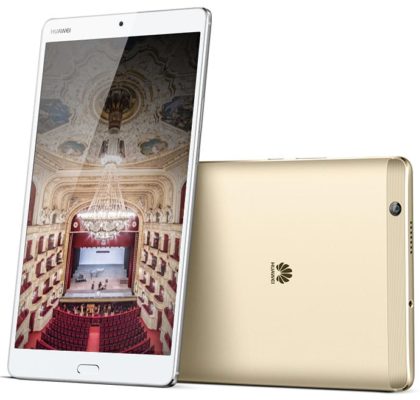 Like most smartphones released in recent times, the Huawei MediaPad M3 sports a metal unibody design and features a fingerprint scanner in its home button. Its design is similar to its predecessor’s.

Under the hood, the Huawei MediaPad M3 is powered by a 2.3GHz Octa-core Kirin 950 processor which runs on the 16nm process. It also comes with a Mali-T880 MP4 GPU for fast graphics operations.

The tablet is bundled with 4GB LPDDR4 RAM capacity and comes with two internal storage variants (32GB & 64GB) which can be expanded up to 128GB with an external microSD card.

The MediaPad M3 is packed with a mammoth 5,100mAh battery which guarantees you up to 48 hours of heavy usage.

Other connectivity features include Bluetooth 4.1 and GPS.

The Huawei MediaPad M3 offers superior sound quality with its Harman Kardon-certified stereo speakers. The speakers offer an SWS 3.0 stereo sound effect which ensures you get the best out of your audio tracks and sounds.

The Huawei MediaPad M3 boots Android 6.0 Marshmallow out of the box with version 4.1 of Huawei’s custom UI Emotion UI.

The Huawei MediaPad M3 has just been announced at the IFA 2016 event and will go on sale from the 26th of September in some European countries, UK and parts of Asia and the Middle East. The pricing goes as follows:

The MediaPad M3 Tablet will be made available in Gold and Silver colour variants.