It’s been a while since we talked about devices other than smartphones on TechVaz, and that’s because these past few weeks has seen many smartphones released. I mean, smartphone manufacturing companies didn’t take a chill at all, mostly due to the recently concluded IFA 2016 event in Berlin. However, the Lenovo Yoga Book is one 2-in-1 tablet I couldn’t do but talk about, which is why I’m writing this post. 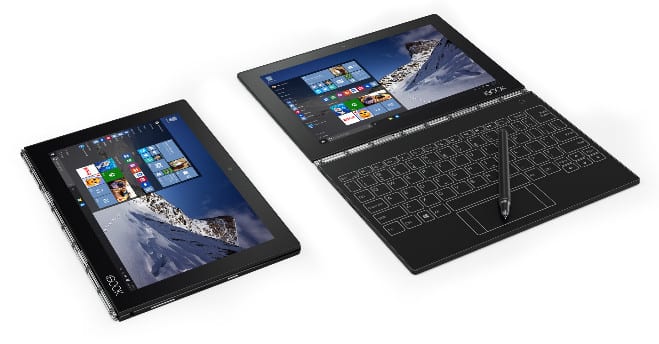 For those that don’t know, a 2-in-1 smart device (mostly tablets and laptops) is one that can act as two iterations of a device in one (e.g. Tablet and laptop in one, Phablet and laptop in one, tablet and notebook in one, etc). In the case of the Lenovo Yoga Book, though I’m not sure that 2-in-1 stands for just the tablet-laptop functionality duality; it packs a lot of new features and innovations that you wouldn’t hesitate to say it should have been qualified as something like 10-in-1 or even higher. So what are these features? Read on. 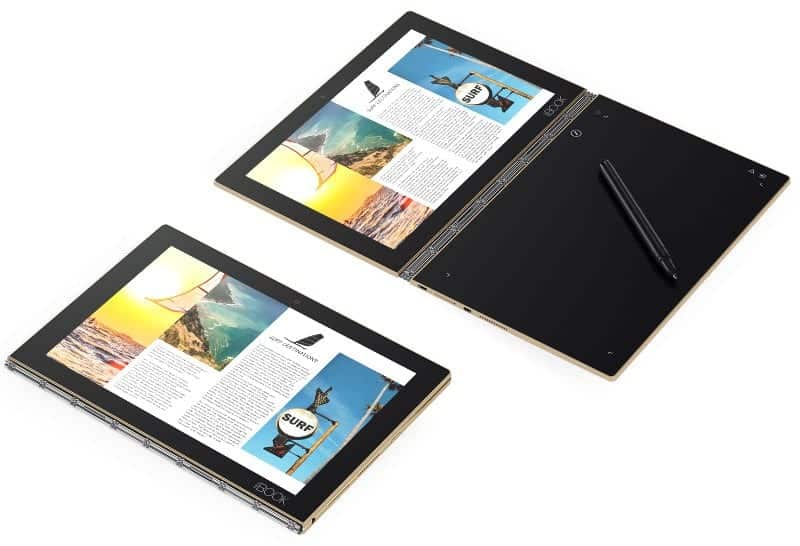 The Lenovo Yoga Book is manufactured with aluminium alloy, and it has a thickness of just 4mm at its thinnest point, that is the lower part of the touch keyboard.

Now to what makes it worthy to have the Book in its name. The Lenovo Yoga Book uses a super hinge system that has been designed to be smaller and work more accurately. In Lenovo’s words:

“The hinge is engineered to be smaller and features a custom-made three-axis hinge, with 130 different mechanical pieces comprising five different materials.

You can use the 2-in-1 tablet in four different modes – Create, Type, Browse and Watch. Each is self-explanatory.

Coming to the screen and display, the Lenovo Yoga Book comes with an IPS display 10.1 inches wide. As you would expect if you were a geek, the display has a resolution of 1920 * 1280 (Full HD) with a brightness level of 400 nits.

Powering the hardcore operations of the Lenovo Yoga Book is an Intel Atom x5-Z8550 Processor with four (quad) processing cores and a maximum processing speed of 2.4 GigaHertz. Performance tests have not been run because the tablet is a relatively new one, but the mere fact that it uses an Intel Atom processor should be enough to assure you the Lenovo Yoga Book is not a slow hag of a device.

It comes with 4GB of RAM capacity using the LPDDR3 technology which gives you fast performance at a lower battery consumption rate, but some modern smartphones use LPDDR4 and it’s a shame it’s not in use on the Lenovo Yoga Book. The 64GB internal storage is commonplace for a modern tablet, including the fact that you can expand it up to 128GB using a microSD slot.

The Lenovo Yoga Book packs a 8,500mAh battery capacity which Lenovo says offers a not exaggerated 15 hours battery life. What?! Even though I’m sure this doesn’t come to play in real time use, this would mean a battery life of not less than 10 hours at worst. Hmm…am I the only one thinking about getting this device right now?

I don’t think there’s anything new to salivate over here, but if you’re just coming into the smart device scene, the Lenovo Yoga Book offers you super-fast connection with 4G LTE network support achieved through a single Nano-SIM slot. Wireless connection is even faster, as the tablet features dual band Wi-Fi 802.11 ac with speeds of 2.4GHz and 5GHz. Don’t forget good old Bluetooth, though; it’s included in this tablet.

Away from wireless connectivity (gives me nostalgia about Apple’s Airpods :/ ), the Lenovo Yoga Book possesses a USB 2.0 port which though might be good for others, is bad for me because it only means you retain those 15 hours of battery life to yourself alone, since reverse charging is only possible with a USB 3.0+ port. Anyway, it works for those it works for.

We’re not left totally hopeless though. Lenovo somehow remembered that the 10.1-inch screen size might not be suitable for every purpose, and included a micro HDMI port in the design of the Yoga Book.

If you’re heading over to this section in search for some mind-blowing features, I’m sorry to disappoint you; the Lenovo Yoga Book is just like every other modern tablet out there, featuring camera units that offer basic photography capabilities. It features an 8MP camera unit at the back, and comes with Autofocus in order for you to capture those wonderful moments faster.

At the front contrary to what you would expect to find if we were talking about the weaker versions of humans here 😉 , there is a mere 2MP camera unit which Lenovo tries to make a bit more usable with the inclusion of Fixed Focus capabilities.

Now you can shout for joy; the Lenovo Yoga Book is packed with a lot of hardware features. Let’s start with the speakers.

When I say a lot of features, I’m not referring to the fact that the Yoga Book has stereo speakers because that’s what I expected it to have. It’s the Dolby Atmos audio technology that interests me here. That’s one superb audio feature you might want to try out.

Let me talk about the keyboard. The one found on the Lenovo Yoga Book is a departure from the laptop or 2-in-1 tablet keyboards we are used to. It’s called the halo keyboard, and that’s because it is a flat touchscreen panel with a virtual keyboard layout with back lights and haptic touch feedback. The keyboard is made with glass and fights glare with its coating type.

The keyboard is sensitive to touch and uses adaptive AI learning to adapt to the typing pattern of its user. It’s weird using it at first, but like other things in life, the more you use it, the more you get used to it.

You can write on the halo keyboard with a special stylus pen which doubles as a normal ink pen, meaning you can switch between writing on real paper to jotting something down on your tablet. You can also use a pencil on it, and artists are catered for with its paintbrush support.

The Lenovo Yoga Book with Android comes in Gold and Gunmetal color variants and carries a price tag of €499 in Europe, N175,600 in Nigeria and KES 56,347 in Kenya.

The Windows-running Lenovo Yoga Book on the other hand comes in Carbon Black colour and costs €599 in Europe, N211,000 in Nigeria and KES 67,637 in Kenya.