Away from the buzz of the IFA 2016 event in Berlin, Reliance Retail has launched another smartphone in its LYF Water series, the Reliance LYF Water 11 in India. 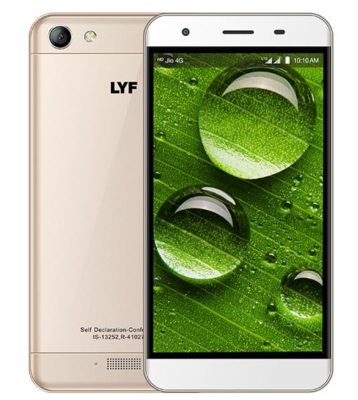 The Reliance LYF Water 11 comes with a 5-inch HD IPS display with a pixel resolution of 1280 * 720, which is the same type of display found on the LYF Water 10. The smartphone is designed with metal.

The Reliance LYF Water 11 is powered by a 64-bit MediaTek processor with eight processing cores and a maximum processing speed of 1.3GHz. It also comes with a Mali-T720 GPU to handle graphics operations.

The LYF Water 11 comes with 3GB of RAM capacity and 16GB of internal memory which can be expanded up to 64GB with a microSD card.

The Reliance LYF Water 11 packs a 2,100mAh battery which ensures at least 12 hours of usage from full charge.

The smartphone possesses a Hybrid Dual-SIM slot which can receive a micro/nano SIM card and a microSD card. It supports 4G LTE network bands, and offers fast wireless connectivity with Wi-Fi 802.11 b/g/n. Other connectivity options include Bluetooth version 4.1 and GPS.

The Reliance LYF Water 11 sports a 13MP rear camera with LED Flash and auto focus which makes capturing of images fast and easy.

It also has a 5MP camera unit at the front, also equipped with Auto Focus.

Unlike its predecessor in the LYF Water series which runs on Lollipop, the Reliance LYF Water 11 runs Android 6.0 Marshmallow out of the box with minimal software tweaks. The phone weighs about 135 grammes and is just 7.3mm thick.