The Samsung Galaxy Note 7 has finally been unveiled after the long wait for the device. The Galaxy Note 7 perhaps should rank as the most discussed smartphone in the last couple of months, perhaps due to the Samsung brand and also the unique flagship features it was touted to tag along. In the end, the device has not failed watchers and fans with the wonderful features it launches with.

The device is already available for pre-order in some countries and would official go on sale on August 19 in the US. All major mobile telephone carriers in the US like T-mobile, Verizon wireless, AT&T and Sprint will sell the device.

Samsung Galaxy Note 7 features Samsung’s latest Octa-core Exynos 8890 processor and in some regions, the flagship device will be powered by a Snapdragon 820 chipset. The dvevice only comes with a 4GB RAM and doesn’t sport the 6GB RAM it was earlier rumored to have. There is also an expansive 64GB internal storage space which is expandable up to 256GB via a microSD card. 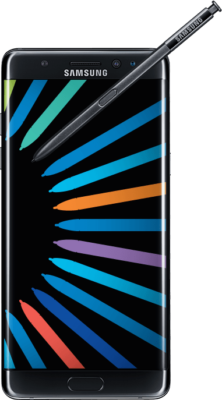 The smartphone boots Android 6.0 Marshmallow OS and crams a modest 35000mAh battery which promises longer usage and offers fast charging both via wired connection and Samsung’s wireless charging pads. There is a fingerprint sensor on the device, an heart rate sensor, a unique iris scanner as well as an S-Pen Stylus. Other features include USB Type-C port, NFC, Blueooth connectivity, 4G LTE support and WiFi.

The Samsung Galaxy Note 7 comes in four different but beautiful color variants, there is the all new Blue Coral variant, Gold Platinum, Silver Titanium and Black Onyx colors as well.

As for the pricing, Samsung has announced the price of the Galaxy Note 7 in the EU, UK, Australia, Canada and USA.  Samsung Galaxy Note 7 buyers in the US will pay $849.99 with T-mobile carrier, but if you are opting for AT&T the Galaxy Note 7 will cost you $880, Verizon purchase comes at $864, Sprint and US Cellular carriers will announce it on August 19.

The price of the device in India is not yet announced as that will be done when the device is officially unveiled in India on August 11. For interested buyers in Nigeria, the Samsung Galaxy Note 7 will become available in Nigeria from September 2 and the price will hover around 280,000 Naira – 320,000 Naira. Pricey, isn’t it?