Lately, a lot of renders and messages have leaked over the Pixel 3 smartphones. Also, the so-called photos appeared online from the devices and until now it seems that they could be quite legit. The Twitter user @PhoneDesigner took it on itself to make renders of the Pixel 3 XL device on the pictures and show the world immediately how the smartphone would look in different colors.

Previously, @PhoneDesigner came with renders of the Pixel 3 XL, but now he has put extra work into it to show different color options. On the images, we see a sleek looking device in the colors white, black/white and a kind of blue tint.

Of course, we do not know whether the smartphone will actually be released in these colors. The Pixel 2 XL is available in the colors Just Black and Black & White, so chances are that we will indeed see the white and black/white variant of the Pixel 3 XL. The blue version would be a nice change and we also vote for a gold.

Only Pixel 3 XL with notch

When the developer preview of Android P was released fans feared/hoped that the Pixel 3 devices would get a notch. The operating system is provided with notch-support and responds to the new trend in smartphone country. This fear/hope indeed seems to be justified, but the damage is still somewhat limited. According to reports, only the Pixel 3 XL would receive notch and the standard Pixel 3 would be saved. 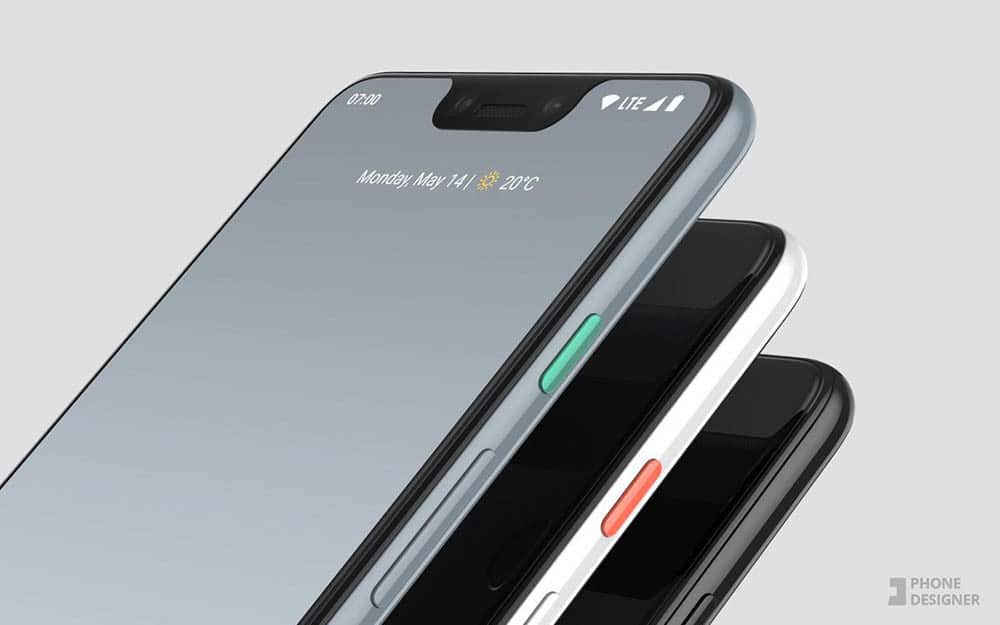 The notch looks a bit bigger in the renders than what we are used to from the thing so far. He seems to be home to a double selfie camera with a speaker. Although the notch should be there to get the most out of the display, Google has chosen according to the images to leave a reasonably large edge at the bottom of the display. The side edges seem to have almost completely disappeared.

A notch or not, it seems that the Pixel 3 XL will become a beast of a smartphone. We may be relieved of our suffering in October and we will then officially know everything about the device.