Xiaomi Redmi Pro flagship phone which is set to be unveiled alongside the Mi Notebook PC on July 27, has been revealed to likely feature an OLED display. This was revealed in a video Xiaomi teased on China’s microblogging site Weibo today. 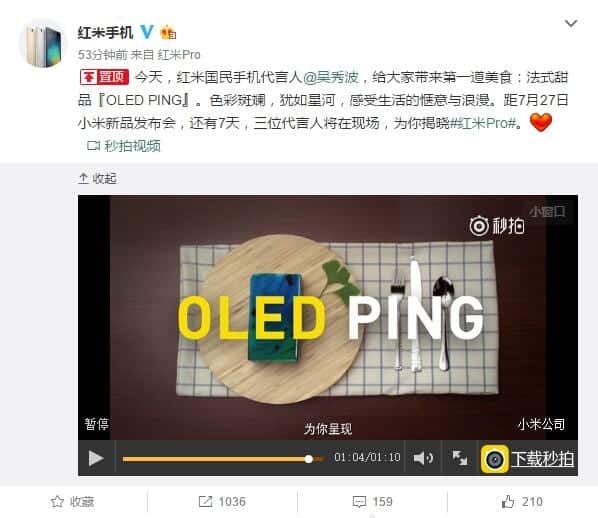 The Redmi Pro was until now thought to be the Redmi Note 4 because it follows the Redmi Note 3 released last year but Xiaomi changed the naming pattern and instead went for Redmi Pro as the name.

The video teaser  was apparently to unveil the spectacular features of the device and if the message is clear enough, we’ll be seeing more teasers in the next seven days before the device is finally made official on July 27 in Beijing, China.

The video teasers hinted at one of Xiaomi’s spokesperson @Wu Xiubo serving us today’s first cuisine which was named French dessert “OLED PING”. French desserts are known to be beautiful looking and tantalizing and the ideo described the so-called Cuisine as “Colorful, like the Galaxy, feel comfortable and romantic life”. The message went on to disclose that from today and in the next seven days before the July 27 news conference, the three spokesmen will be involved with the launch of the Redmi Pro.

The teaser went short of confirming there’ll be an OLED display which is described as colorful like the Galaxy, perhaps in comparison with our stars packed Milky way galaxy or the Samsung Galaxy series which also feature AMOLED displays. The OLED display will star on the 5.5-inch 1080p display which the Redmi Pro has been tipped to come with. The Redmi Pro will also feature a 4GB RAM, Android 6.0 based MIUI OS, dual cameras, a deca-core Helio X25 chipset and lots more amazing features.