Zen Mobiles has launched a new smartphone in its Cinemax series, the Zen Cinemax Click which has 4G VoLTE support like other smartphones in the series.

The Zen Cinemax Click has a 5.5-inch IPS On-Cell display with an HD (1280 * 720) display resolution. It’s powered by a quad-core processor which runs on the 64-bit process and has a clock frequency of 1.3GHz.

The phone comes with 1GB of DDR3 RAM and 8GB internal memory which can be expanded up to 32GB with a microSD card. Like its counterparts in the Zen Cinemax series, the Cinemax Click has a dual SIM slot with support for 4G Voice-over-LTE (VoLTE).

The Zen Cinemax Click sports an 8MP camera with LED Flash at the rear, and a 5MP camera also with LED Flash upfront. The 3.5mm headphone jack is still there, and it includes support for FM Radio.

The Zen Cinemax Click packs a 2700mAh battery and runs on Android 6.0 Marshmallow out of the box. The default keyboard application on the phone is Swalekh Keyboard which supports twenty Indian languages. The phone is also pre-loaded with apps (bloatware) like Zen AppCloud and Zen Game Store. 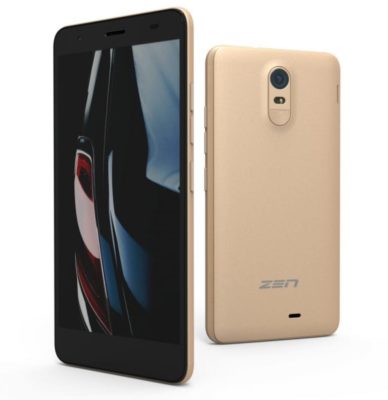 The Zen Cinemax Click comes in Golden colour and is available in India for Rs. 6190.