Exynos VS Snapdragon VS MediaTek Processors – a detailed comparison. There’s no limitation to what can be achieved by technology. Every day new, boundaries are broken in the world of technology. It’s arguably the fastest growing sector in the world right now. An emerging segment of technology is the mobile segment. As at January 2018, the number of mobile phone users in the world has reached 4 billion. And it’s expected to pass the 5 billion mark by 2019. A huge contribution to the growth of the mobile market is the smartphones. 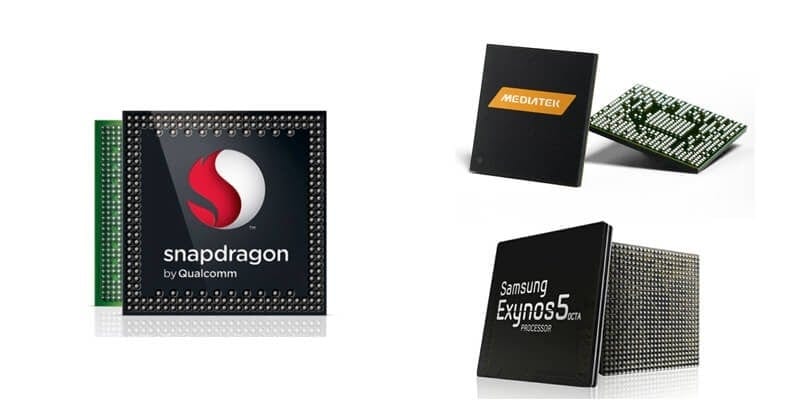 In 2014, 38% of all mobile users were smartphone users. By 2018, it had increased to about 50%. The total number of smartphone users is expected to reach 2.7 billion by 2019. In the last few years, smartphone companies have thrived tremendously and there is no slowing down. The most important part of any smartphone is its hardware. It’s like the engine that powers everything on the device. The same way a car won’t work without its engine is the same way a smartphone won’t function with its hardware.

Inside the hardware is the processor, which runs everything. And it’s needed for performing any task on the phone, be it gaming, browsing, and calling. The processor houses the GPU, CPU, RAM, LTE and so many more. We have a lot of companies that manufacture these processors, such as Qualcomm, MediaTek, Samsung Exynos, Huawei Hisilicon Kirin e.t.c. For the purpose of this article, we’ll be looking at Qualcomm, MediaTek, and Samsung Exynos. Let’s figure out factors and areas, which makes them unique and different from one another.

Exynos VS Snapdragon VS MediaTek Processors – The Basics

Exynos is a System-on-Chips(SoC) manufactured and owned by Samsung Electronics. Their latest one is the Exynos 9810 chipset, which is featured on the 2018 Samsung Galaxy S9 and S9 Plus. Samsung usually makes two versions of their Galaxy S-series smartphones. The USA version is being powered by Exynos chipset. Whereas, the global version is powered by a Qualcomm Snapdragon chipset. In the article, we will be making use of their Exynos 9810 chipset for our comparison.

The Qualcomm is a US-based company that got popular with its Snapdragon chipset. The Snapdragon chipset is arguably the best in the market right now. And they have a processor for every segment of the market; high-end, mid-rangers and budget. Their most powerful chipset is the Qualcomm Snapdragon 845 chipset, which powers various high-end smartphones such as Samsung Galaxy S9, OnePlus 6, Xiaomi Mi 8, LG G7 ThinQ, HTC U12 Plus, Oppo Find X, Vivo Nex S and others. The Qualcomm Snapdragon 845 chipset will be our focus for this article.

MediaTek is a company in Taiwan, which manufactures MediaTek processors. They are not really popular in the high-end segment of the market. Most devices that are being powered by MediaTek are usually mid-range and budget phones. Their chipsets are cheaper compared to Qualcomm chipsets, which is why most start-up brands like Elephone, Oukitel, Doogee and the like use them. In this article, we’ll be using the MediaTek Helio X30 for our comparison.

Exynos VS Snapdragon VS MediaTek Processors – The CPU

Samsung also customized their ARM Cortex cores but not fully like Qualcomm. The Exynos 9810 uses an 8-cores processor consisting of four Mongoose (3rd gen) clocked at 2.9GHz and four Cortex-A55 clocked at 1.9GHz. The Mongoose customized core is Samsung third generation, which the company said it has a wider pipeline with improved cache memory.

Exynos VS Snapdragon VS MediaTek Processors – The GPU

The Snapdragon 845 uses Adreno 630 graphics processing unit. For mobile gamers, this is pretty much the best around. According to Qualcomm, the Adreno 630 GPU features Adreno Foveation, room-scale 6DoF with SLAM, and improves graphics rendering with video processing compared to the previous generation.

The Exynos 9810 uses the ARM Mali-G72 MP18 graphics processing unit. The GPU offers realistic graphics with a 20% increase in performance than its predecessor. This is because the GPU is built on ARM’s second generation Bifrost architecture, which is intended for high performance and low battery consumption. Though, Gamers have complained about lagging when playing some certain high-end games with this chipset.

The Helio X30 uses a fully customized Imagination PowerVR 7XTP-MT4 graphics processing unit. According to MediaTek, the Helio X30 saves up to 60% power compared to the Helio X20 and also increases performance by up to 2.4 times.

Exynos VS Snapdragon VS MediaTek Processors – Other Features

All three chipsets (Exynos 9810, Snapdragon 845 and Helio X30) are built on the latest 10nm process technology. They both support LTE and the memory type is LPDDR4x. The Snapdragon 845 and Exynos 9810 are AI-driven and support fast battery charging. While the Helio X30 is doesn’t, which is why most popular high-end smartphones don’t use it.

MediaTek has announced the successor of the Helio X30 won’t be released for now. Due to how badly the Helio X30 perform against other competitors in the high-end segment like the Snapdragon 845 and Exynos 9810. The Taiwanese company will be focusing on the mid-range and budget segment for now.

I think with that been said, it clearly means the Helio X30 chipset is a loser here. So the real fight is between Snapdragon 845 and Exynos 9810. Gamers who use Exynos powered smartphones have complained seriously about the lagging they experience. Qualcomm is the king when it comes to processors, both in the high-end, mid-range and budget segment.

It’s no coincident that all the gaming smartphones released so far run on Snapdragon chipset. The Razer Phone, ZTE Nubia Red Magic, Xiaomi Black Shark and Asus ROG Phone are all powered by either Snapdragon 835 or 845 chipsets. Even Samsung is using the Snapdragon 845 chipset for the global version of the Samsung Galaxy S9 and S9 Plus.