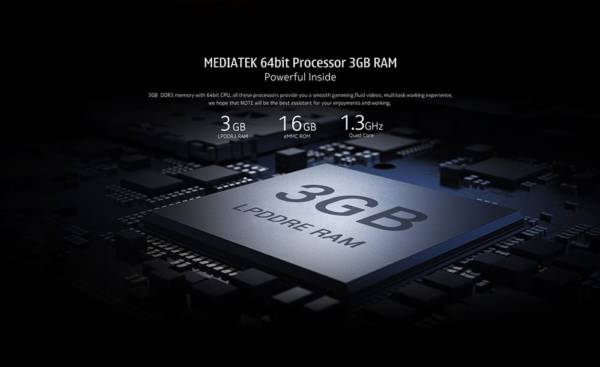 The Geotel Note’s outstanding feature is its 3GB of RAM – and at a really affordable price, amongst other nice features. 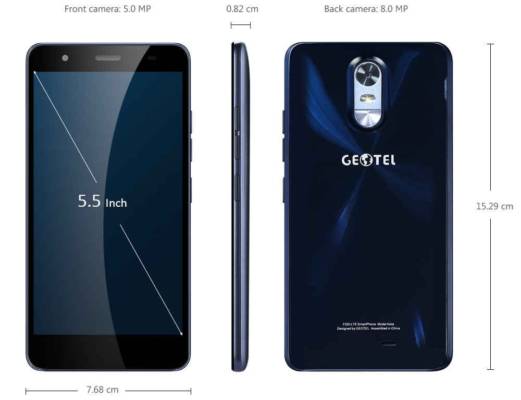 Released in 2022, the Geotel Note comes in a plastic package – although it looks like metal because there are some metal components. The manufacturer stylistically dubbed the body as “MetalPrint” as the phone appear premium to the eyes. According to Geotel, the Note smartphone uses a concentric-circle patterning, which gives an aesthetic feel and look. Available colors for this device are dignity gold and phantom navy.

The Note’s ergonomic’s design and weight – about 147 grams – allows for a nice and comfortable grip. Based on the design, you get a visual thickness of 4.13mm; with the actual thickness being 8.2mm.

You have MediaTek’s MTK6737 64-bit chipset with a quad core CPU running at 1.3GHz maximum frequency aided by the Mali-T720 GPU that supports a maximum HD resolution.

As the most important aspect of this device, there’s 3GB of RAM available; which is pretty great, right?. However, you should understand that the actual available RAM is less than that when using the smartphone. Onboard storage for the Geotel Note is 16GB – should also be less as the OS takes part of it. There’s also the option of storage expansion via a microSD card.

For software, the Note runs on the Android 6.0 Marshmallow OS. Although, the MTK6737 chipset is not a very powerful one, when you combine the large 3GB of memory and the Android 6.0 OS, you can expect quite a decent performance by the Geotel Note while running most casual apps. However, you may experience frame drops or lagging while playing heavy games on the device despite the RAM size.

For photography purposes, there are two cameras on the Geotel Note smartphone. You have an 8MP shooter at the back of the device and an 84 degree wide angle 5MP selfie camera. Each camera has an aperture size of f/2.0 which allows in more light for capturing better quality photos. You can also increase the camera resolutions – via software interpolation – to 13MP and 8MP on the rear and front cameras respectively.

The battery type used is a Li-Po battery, and is removable by the way. Battery capacity for the Geotel Note stands at 3200mAh, which is not that bad. Based on what the manufacturer says regarding the battery life, you should expect the battery to last for one full day on light to average usage. It is also worthy to mention that there is a quick charge feature (Pump Express 2.0) that enables the battery to get charged up to 40% in just one hour.

Definitely, the most interesting part of this device – for its price of less than $100 – is the large 3GB RAM that came with it. Besides that virtually every other feature of the Geotel Note is about mid-range. But it doesn’t mean that the device is not worth your consideration. If you’ve always wanted a phone with 3gigs of RAM and at an affordable price, this smartphone should easily make your wish list.