It isn’t up to 2 months since Gionee released two new devices to its M-series of smartphones. The M-series is known for having devices with huge battery capacities, as evidenced by the Gionee M6.

A leaked image that surfaced online have revealed the Antutu Benchmark details of an upcoming Gionee M7 Plus which is a possible upgrade to the September-released Gionee M7 and Gionee M7 Power.

Going by the above information, the M7 Plus will also use Qualcomm’s Snapdragon 660 System-on-Chip and will feature 6GB of RAM and 64GB of internal storage; like the Gionee M7.

Regarding the display, no detail in the leaked Antutu Benchmark point towards the size of the screen of the upcoming M7 Plus but the resolution was stated – 2160 × 1080 pixels. 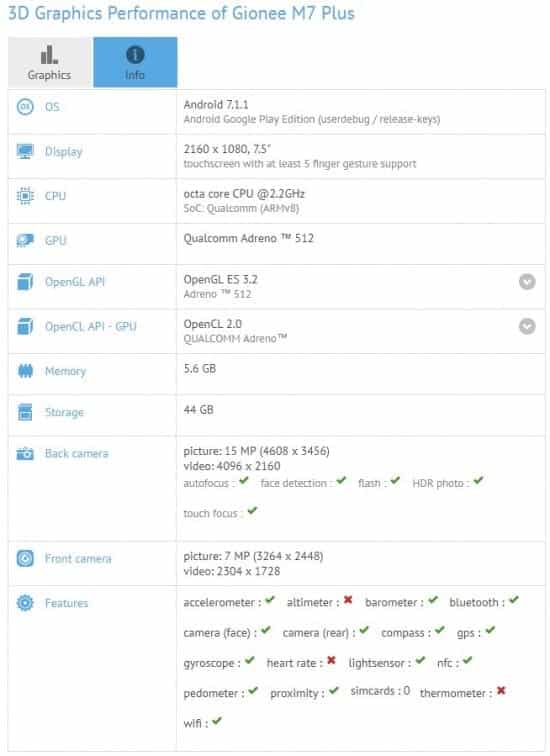 The difference between the Gionee M7 and the soon-to-be launched M7 isn’t clear enough yet as only the chipset used on the devices seem to be the only differentiating feature. Also, the camera set-up and quality.

Following these leaks, the Gionee M7 Plus doesn’t really seem like much of an upgrade to the Gionee M7. Perhaps, when the device is launched by November 26 (according to speculations), it will feature a much bigger battery and display size than the Gionee M7 and Gionee M7 Power.

Conclusively, we also speculate that there could be a Mini and/or Lite version of the Gionee M7 (as with the Gionee M6 Mini and M6 Lite) but they may not be arriving anytime this year.