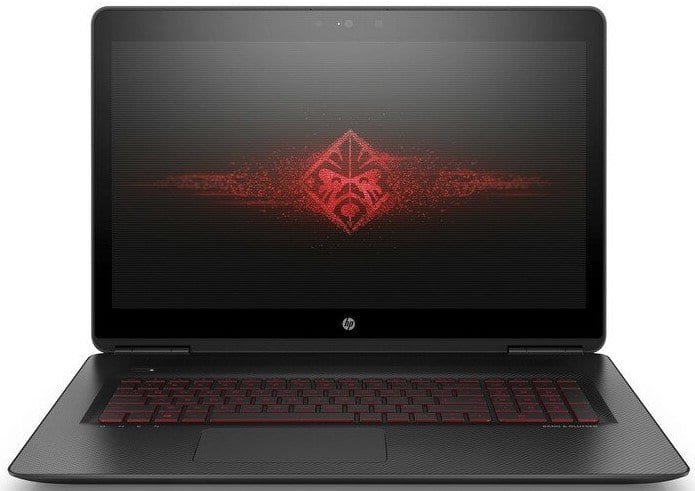 HP’s Omen series is peculiar for laptops that feature high-performing internals that can only be found on gaming-ready laptops. The Omen 17 is a combination of many great things that include a Core i7 CPU, a Nvidia GeForce GTX 1070 GPU, 16GB of RAM and much more. This 17-inch laptop does not try to hide its chunk as evident in the bulky chassis.

Ultra-portability is definitely not one of the strong suits of the HP Omen 17, but what it lacks in portability, it makes up for in performance. That being said, let’s meet the HP Omen 17.

There are only a few powerful gaming laptops that come in a thin and light package, unfortunately, the HP Omen 17 isn’t one of them. This laptop weighs a minimum of 6.3 pounds (there are heavier variants) and as a result, is not an ultraportable laptop.

The rear of the Omen 17 has 2 air vents at both ends for the cooling system. And the top of the lid has an X-like design on it. The design is remarkable with the upper and lower parts having a smooth matte finish while the left and right sides have a traversing thread-like finish.

Opening the laptop introduces us to a screen connected to the deck by a single long hinge that makes opening the Omen 17 with one hand quite easily.

The display on the HP Omen 17 is a 17.3-inch panel with 120Hz refresh rate and support for Nvidia G-Sync. This IPS display has a resolution of 1920 x 1080 pixels and is touch sensitive. The matte screen is also bright and has good color reproduction and contrast. A 4K model of the Omen 17 is also available but with an extra cost.

The HP Omen 17 comes with a full-size keyboard that has a number pad. And as with other gaming laptops, the keyboard is backlit. The keyboard also includes a set of programmable macro keys lined up vertically to the left of the main keyboard.

The keys have black coloring with red backlighting and labels whereas the WASD keys are labeled in white with orange background. In addition, there’s an option to have only the WASD keys backlit. This is clearly a marketing gimmick targeted at gamers.

The touchpad on the Omen 17 is quite comfortable to work with although the size is fairly small. Two buttons are present below the touchpad. The smooth touchpad is very responsive with little or no issues.

As stated in the introduction, the HP Omen 17 is powered by a seventh-generation Core i7-7700HQ CPU and a GTX 1070 (with 8GB of VRAM). 16GB of RAM and an internal storage setup of 256GB SSD + 1TB HDD ensure that this laptop doesn’t lack in memory and storage respectively. Just to add, there is a 32GB RAM variant.

The quad-core CPU is clocked at 2.8GHz but can reach 3.8GHz via Turbo boost. This powerful processor is a popular one as most gaming laptops ship with it. Running your favorite Windows software on this laptop should be a seamless experience as well as playing top gaming titles.

With a support for dash charging via the Thunderbolt 3 port, the Omen 17 can reach 90% battery level in one and half hours. That being said, the battery can deliver up to 12 hours of usage (according to HP); however, this is dependent on a number of factors including the type of application being run.

Three USB 3.1 Type-A ports, one Thunderbolt 3 port, a DisplayPort, a mini DisplayPort, HDMI, an SD card slot, a Kensington lock, microphone and headphone jacks make up the port selection for the HP Omen 17. Not forgetting, Wi-Fi and Bluetooth radios are also present on the laptop.

This laptop can be picked for a starting price of about $2000.

A bulky design but with great firepower, the HP Omen 17 comes at a time when you most of the powerful gaming laptops cost at least $2500. Its large vivid screen and good ventilation system plus powerful internals are the hallmarks of a gaming laptop.