HTC has launched its latest flagship smartphone in the all-new HTC U series, the HTC U Ultra at an event in India. The smartphone was first sighted in January when it was officially announced, and just last week, the company sent out invites for the phone’s launch event which took place today.

What makes the U Ultra spectacular is its secondary display which was present on the LG V20 and gives you access to some extra useful functions alongside the ones the main display gives you. The U Ultra was announced alongside another new HTC smartphone in the U series, the HTC U Play. 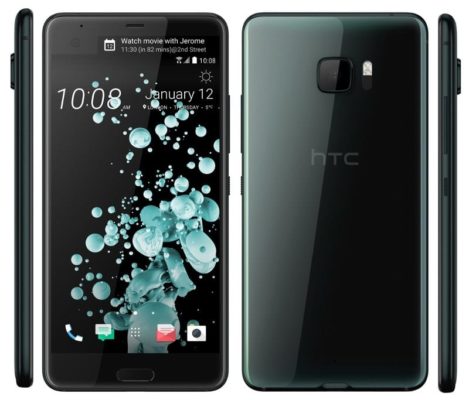 The HTC U Ultra comes with a 5.7-inch Super LCD 5 primary display with a Quad HD resolution and Gorilla Glass 5 protection for the standard 64GB ROM variant and Sapphire Glass protection for the 128GB ROM variant. It also has a 2.05-inch secondary display which is made with the same technology as the primary and has a 1040 * 160 pixel resolution and 520 PPI pixel density.

The phone is made of metal and both the front and back are covered with glass finishing, the rear glass being fully curved at all edges.

Under the hood, the HTC U Ultra is powered by a quad-core Qualcomm Snapdragon 821 processor with a 2.15 clock frequency and an Adreno 530 GPU.

It has 4GB of RAM and comes in 64GB and 128GB internal memory variants, both of which can be expanded up to 2TB via its microSD card slot.

The flagship smartphone sports a 12MP UltraPixel 2 camera with a dual-tone LED flash at the rear and a 16MP selfie shooter with UltraPixel mode and a f/2.0 aperture at the front.

The rear camera can capture excellent pictures in low-light situations since it has a f/1.8 aperture. It also has OIS (Optical Image Stabilization) for capturing more stable images, and its Laser Autofocus (AF) feature allows it to focus on images faster.

It packs a 3000mAh battery with Qualcomm’s Quick Charge 3.0 feature which allows you to charge the battery up to 56% in just 30 minutes.

Like in recent HTC smartphones, the U Ultra lacks a 3.5mm audio jack and forces you to make all your connections through its USB 3.1 Type-C port. You can make wireless and seamless payment transactions with the phone since it comes enabled with NFC.

On the hardware side, the HTC U Ultra uses the HTC Usonic and BoomSound Hi-Fi audio technologies with 3D Audio recording with 4 microphones. It also sports a fingerprint sensor embedded into its home button present below the display.

The smartphone runs on Android 7.0 Nougat with HTC’s Sense UI layered on top. Software-wise, the HTC U Ultra comes with HTC’s new smartphone AI – HTC Sense Companion which learns about its user over time, offers advice based on his/her preferences, and helps the user to carry out tasks on the smartphone.

Availability and Price of HTC U Ultra in India

The HTC U Ultra comes in Sapphire Blue, Brilliant Black, Ice White and Cosmetic Pink colours and will be available in India starting from the 6th of March. The smartphone comes with a one-year insurance and 7.5% cashback when you use your Standatd Charted card (debit or credit) to order it between the 6th and 31st of March.

The HTC U Ultra costs Rs. 59,999 in India, which in my opinion as is many others, overpriced for a smartphone that uses a MediaTek processor.