The Infinix S2 Pro got jaws dropping when it was discovered it would be running Android 6.0 Marshmallow out of the box. Considering the fact that rival smartphones like the Innjoo 4 & Tecno Camon CX released in the new year were running on the Android 7.0 Nougat OS out of the box, it was expected that the S2 Pro would also tow a similar software line.

Although other features were top-notch, the smartphone which is a successor to the Infinix Hot S surprised many and left us wondering if it would get the Android 7.0 Nougat update for Infinix smartphones between April and June this year. Well, fortunately, away from wonderland, the Infinix S2 Pro has been updated to Android 7.0 Nougat just after a week of release, even before many of the smartphones in Infinix’s Nougat update list.

We still don’t have the full details of the benefits the update to Nougat 7.0 would add to the device, although we expect that it would feature very much the same changes that we saw in the Infinix Note 3 Android 7.0 Nougat update. What we’re sure of, however, is that the Infinix S2 Pro Android 7.0 Nougat adds the features and software optimisations prevalent in the Nougat to the smartphone.

How to update Infinix S2 Pro to Android 7.0 Nougat 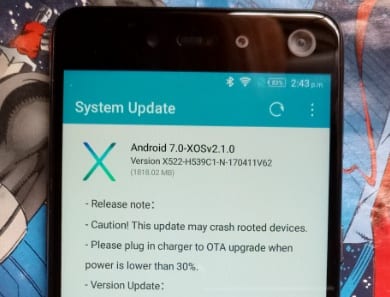 The update package would take up a significant chunk of your device memory, going by the fact that it is as large as 1.8GB in size. The software package is available OTA (over-the-air), so in order to download it, follow these simple steps; head over to Phone Settings >> About >> Software Update.

Considering the large size of the update package, you might just want to download over a Wi-Fi network, or better still subscribe to a large enough data plan on your preferred mobile network. It would also be wise of you to have your device well charged before beginning the update (who knows how long it’s going to run) especially if you are on a mobile network.

After your mobile device restarts, welcome aboard the Nougat OS, and if you are reading this article and have refrained from getting the Infinix S2 Pro earlier, you might just rethink your decision.