It’s 2017, and popular Chinese smartwatch and wearables maker, No.1 has started its productive year with a big thing for smartwatch lovers; a new smartwatch in its No.1 F series called the No.1 F2. Obviously, the No.1 F2 succeeds the No.1 F1 smartwatch that was released towards the end of last year and amassed favourable reviews all around the techosphere.

We recently received a unit of the No.1 F2 Smartwatch, and I now bring you my honest review of the new sports smartwatch. I’ve had it for a few days now, and from the short time I’ve spent with it, I can say that the No.1 F2 is the definition of simplicity in terms of outward features and appearance, but a sophisticated device regarding internal features (functions and sensors).

Even though the No.1 F2 lacks some features some may consider important (more on that later), it has the necessary ruggedness and sensor backup to stand its own against other comparable smartwatches.

No.1 F2 Smartwatch Review – The Sports smartwatch with loads of sensors 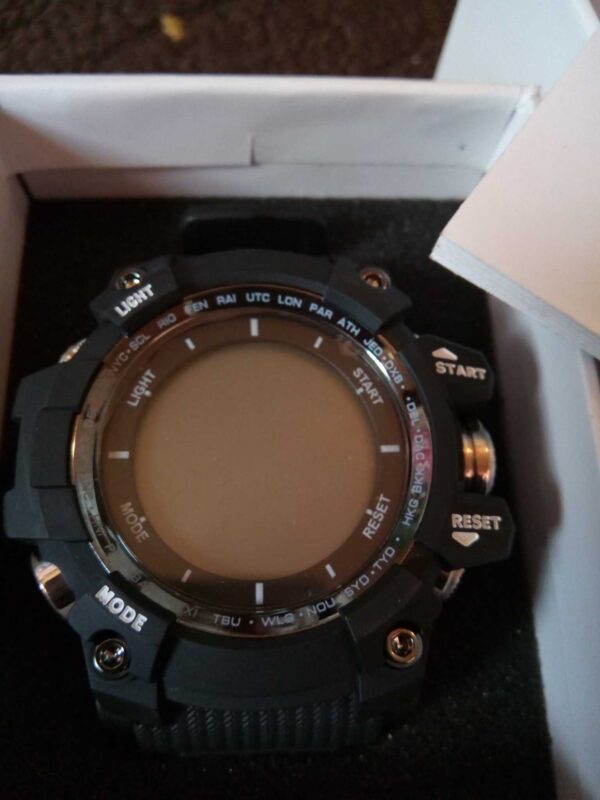 Before I start telling you my experiences with this smartwatch, let me first brief you of its specifications:

Now to the review in proper. 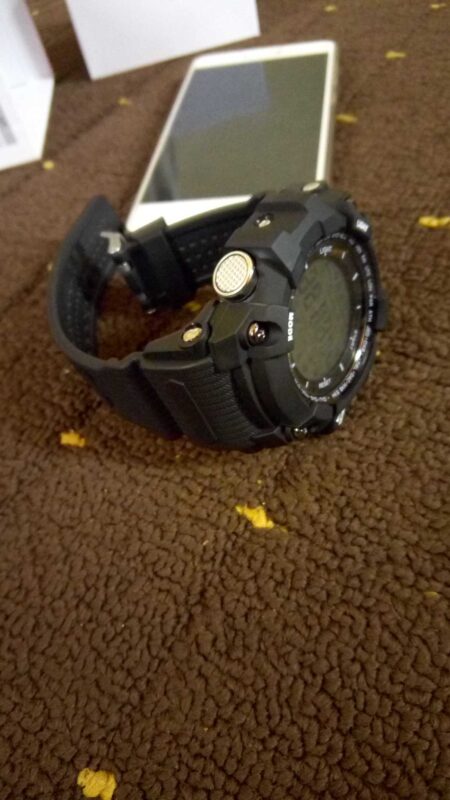 The No.1 F2 is designed like a normal rugged watch, which is fine since it’s designated as a sports watch. The device has a metal dial which is made with aviation-grade stainless steel material, giving you the assurance that it’s durable. This dial is further protected with a nano-silicone material which also covers the outside part of the smartwatch. 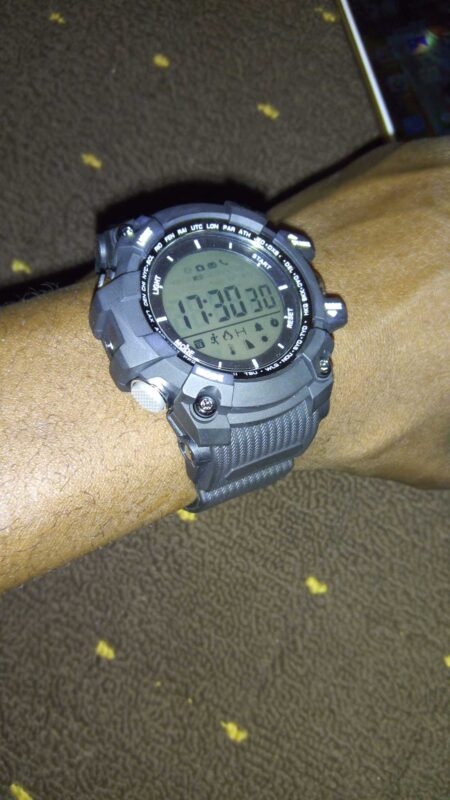 The No.1 F2 smartwatch possesses four physical buttons which are used to control different functions on the device. There are appropriate labels for each button, and starting from the top left one in a clockwise motion, the buttons have the following labels – light, start, reset and mode, each of which is pretty self-explanatory. 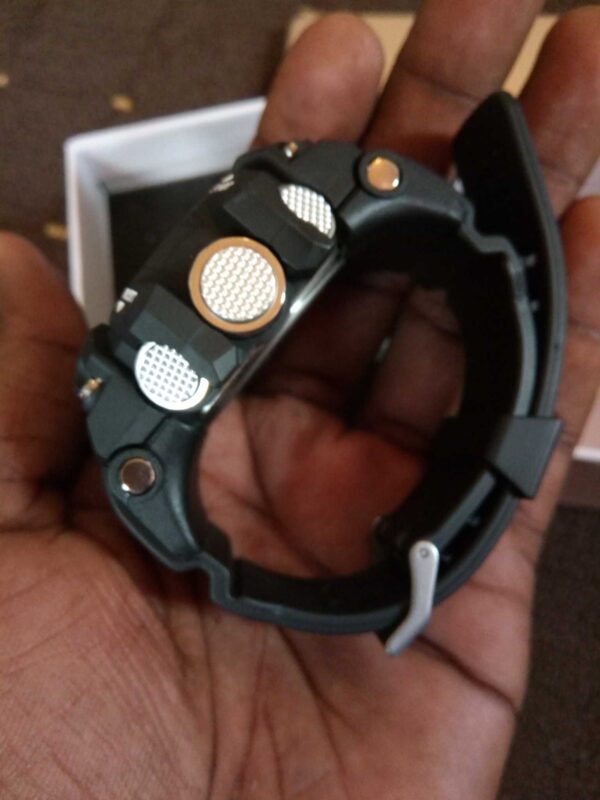 To the last aspect of the design, the No.1 F2 comes with straps made of TPU material and a buckle made of stainless steel. These two components are just like what you would get in a normal durable wristwatch, so don’t expect anything much here. 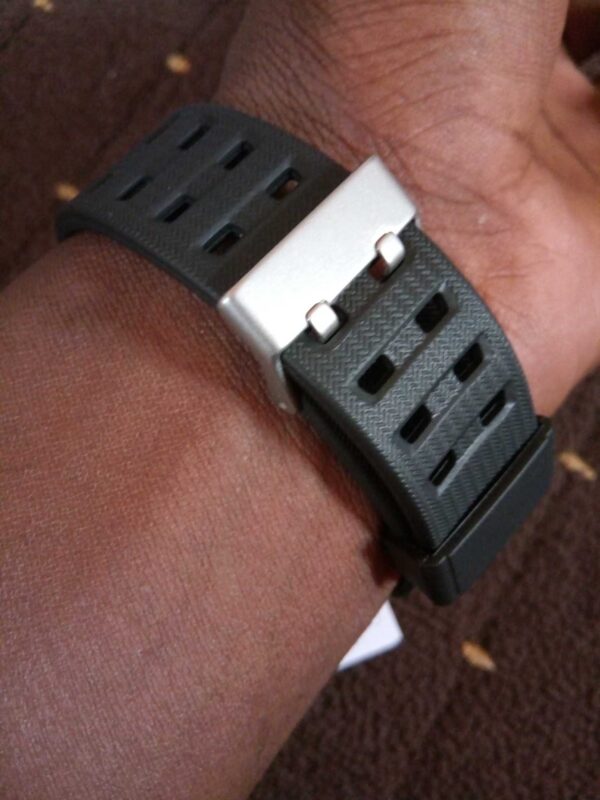 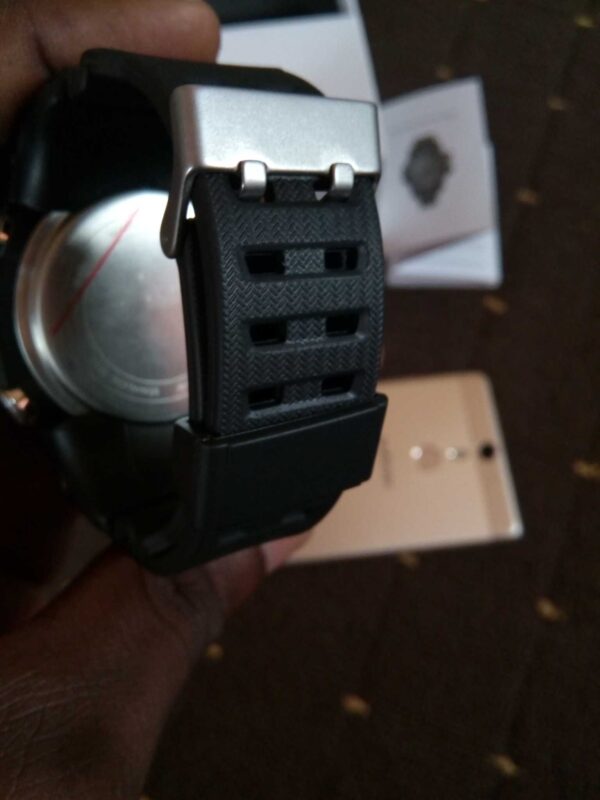 Overall, the No.1 F2 has a bulky build which helps it to withstand tough situations and weather conditions. This is to be expected, as it’s called a sports watch. 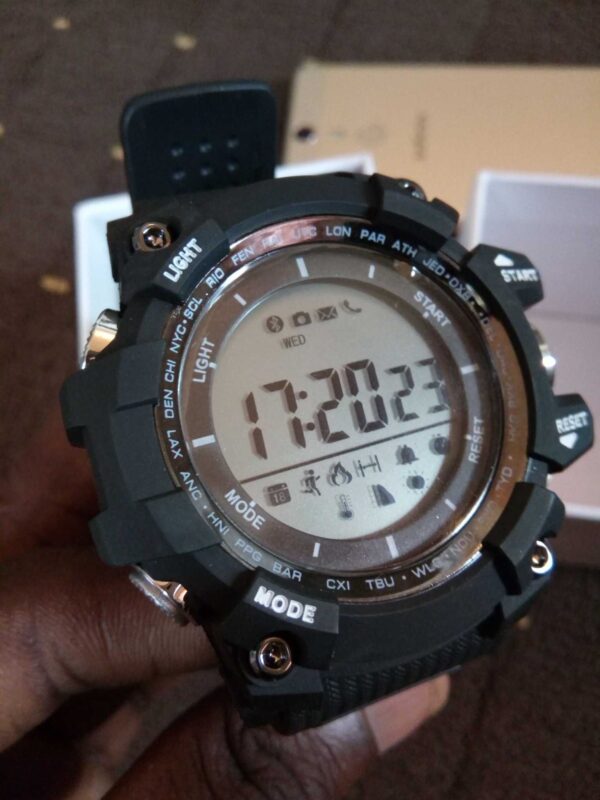 The No.1 F2 smartwatch comes with a 1.1-inch display which uses a display technology that’s not common to devices of this kind; it uses a segment code display tech (LED) which is more power-saving than the display tech (IPS LCD) commonly used in most smartwatches and smartphones. 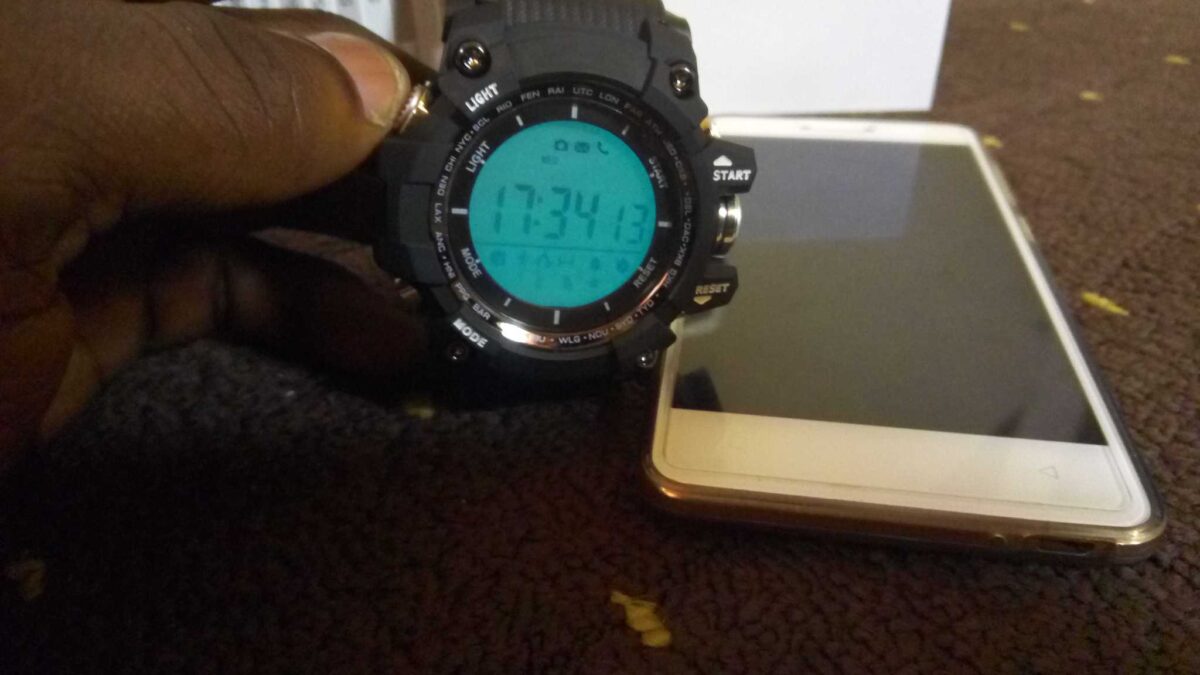 The display on the F2 is, however, not responsive to touch, so if you were hoping to get the same experience with your smartphone, you’d be disappointed; all you can use to control the watch are the four physical buttons and your smartphone (to some extent).

However, you will not be able to see its display at night because of the display technology used and so, you going to press a button (A button) to turn ON the backlight for few seconds.

As I mentioned briefly earlier, the No.1 F2 smartwatch possesses IP68 certification for water and dust resistance, meaning that it can be submerged into up to 30 metres of water without developing any defects, and can survive in areas with a lot of dust. 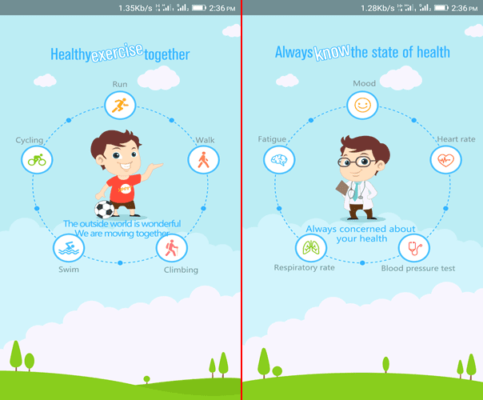 Just like other smartwatches in its class, the No.1 F2 can be connected to your smartphone for data syncing and remote monitoring. The connection is made via Bluetooth 4.0, but the actual monitoring and syncing is done via the official support app (Fundo Bracelet) which you have to download either by scanning the QR code in the user manual or doing a manual search on your device’s app store. The watch supports Android 4.3+ and iOS 7+; I’m using an Gionee F103 Pro with Android 6.0 Marshmallow, so it worked pretty fine in my case. 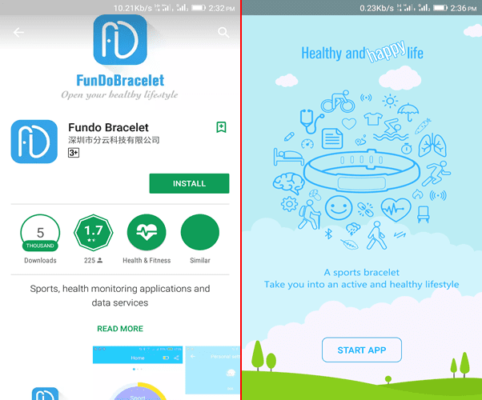 After downloading the app, you have to go through the process of signing up which is frustrating and not exciting, but is one I had to follow through for the sake of this review. However, after getting past the signup stage, all you need to do is to search for the pre-paired (via bluetooth) device and connect. And that’s where the fun ends. 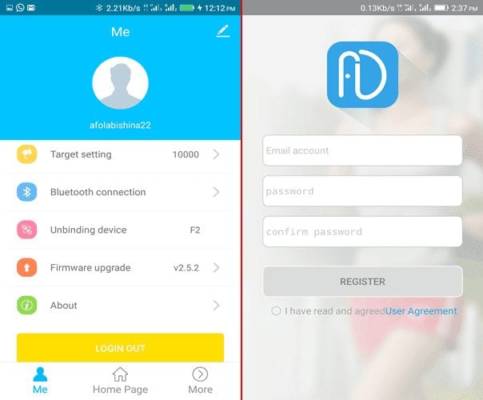 The Fundo Bracelet app is a basic interface that, though has three tabs, can only be used to monitor two parameters; a step counter and sleep monitor. There is a third heart rate monitor tab, but since the No.1 F2 smartwatch doesn’t have an heart rate monitor, this is pretty useless. 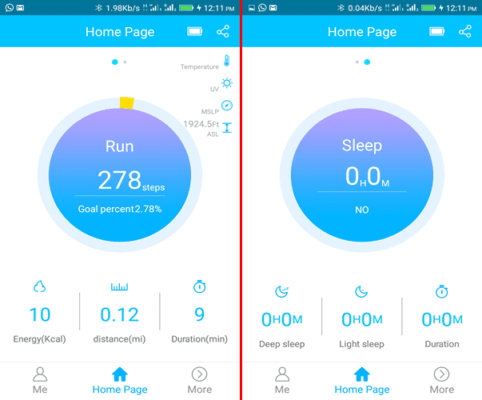 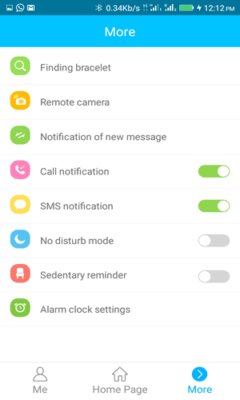 You can not read or answer any notification from the watch unless you actually open your phone to see. In order to get those notifications on the watch, your phone must have the Fundo Bracelet app and be connected via Bluetooth to the watch. 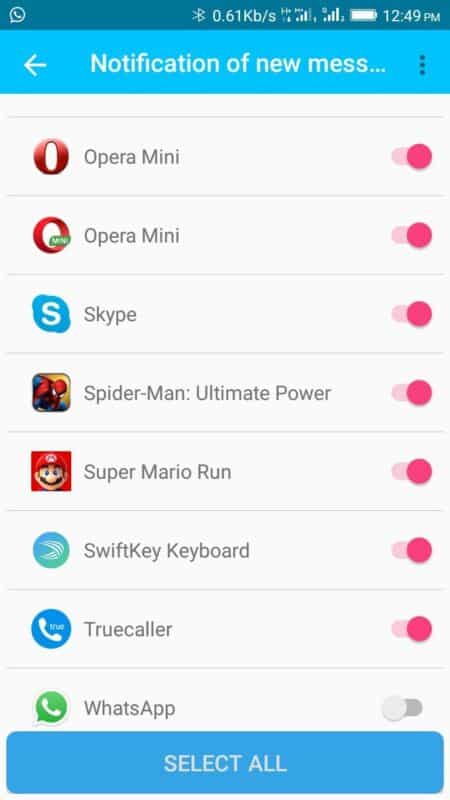 As I said earlier, the No.1 F2 is packed with so many sensors that you would wonder why it’s been sold at such a low price as $19.99. Here is a list of its sensors:

The names of the sensors are pretty self-explanatory, but if you’re new to this, let me explain a little. The pedometer is used to count steps, the altimeter for measuring height and elevation, the thermometer for measuring temperature, the distance calculator for, well, calculating distance 🙂 , the UV sensor for calculating the level of exposure to ultraviolet rays, and the sleep monitor for recording details of your sleep period.

The No.1 F2 can also be used as a remote control for your smartphone’s camera, a feature that comes in handy when remote monitoring is needed.

You can choose which sensor function you want to be displayed on the screen by pressing the mode physical button which can also be used for changing the smartwatch settings.

The No.1 F2 smartwatch’s main concern is about the battery life, which is why two uncommon features were introduced in the display and battery sections; the LED display tech which saves battery and a replaceable 550mAh CR2450 button battery which has a battery life of one year and a standby time of two years 😮 , instead of the normal rechargeable Li-ion or Li-Po batteries. That’s a lot of battery life, if you ask me. You don’t need to charge this.

Although I have not actually got enough chance to use the watch, so lets say the battery can last more than six years on heavy usage. I have been using it for about two days and the battery is still at 100%, which means there has been no reduction in power so far.

The pros are more than the cons. But again, it is a $19.99 smartwatch and can still track your steps, distance, calories, and so on. It can as well show the temperature, but I believe the temperature sensor inside of our review copy is faulty and does not work; t has been reading 28 degree since I have been using it, and I even took the watch outdoor for a walk under the hot weather yet it is still showing same temperature measurement. It can also show you the UV (Ultra Violet) index, but again I am not sure if that too is working because it has been stuck on exact same value since more than two days now. But for a watch under that low price tag, you get a sport watch that does not look too bad. At least the pedometer, calories monitor, distance counter, Bluetooth and notifications are working fine considering the price.

As you can deduce from my review above, the No.1 F2 smartwatch is primarily made for sports, and should be graded as such. It’s a big improvement over the No.1 F1, but there’s still more work to be done especially in the display and smartphone app aspects.
However at a price as low as $19.99, you really can’t complain because it’s hard to find a similarly-priced device with as many features and sensors as the No.1 F2.