The Oppo A3s has been launched in India as the downgraded version of the Oppo A3 smartphone. The device targets those on a budget and packs 2GB of RAM and 16GB storage space.

Table of contents: show
1 Design
2 Display
3 Hardware and Software
4 Camera
5 Battery
6 Where To Buy New Oppo A3s Cheap
7 Oppo A3s Full Technical Specifications
7.1 General
7.2 Network
7.3 Design
7.4 Display
7.5 Camera
7.6 Software
7.7 Hardware
7.8 Connectivity
7.9 Battery
7.10 Media
7.11 Other Features
7.11.1 ==> Disclaimer: Specifications, features & price shown for the above device was entered manually. We can not guarantee that the info on this page is 100% correct. If you think that any information for the current device is wrong or missing, please don’t hesitate to Contact Us.
8 What is Oppo A3s Price and Availability Status? 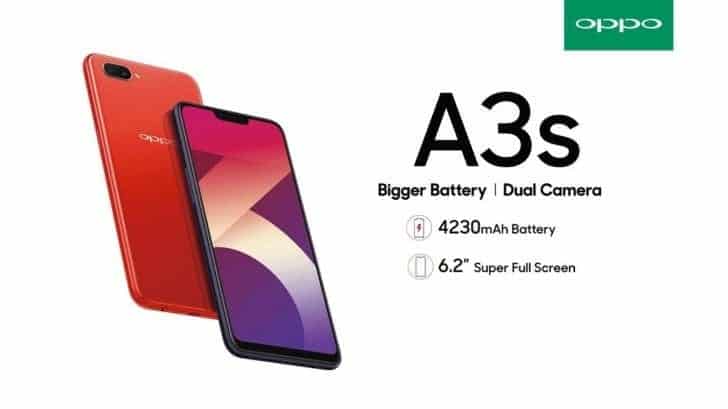 This is coming just days after the company released the A73s which is a watered-down variant of the A73 smartphone as well. The A3s is powered by the Snapdragon 450 chip and 4230mAh battery. Lets find out more. 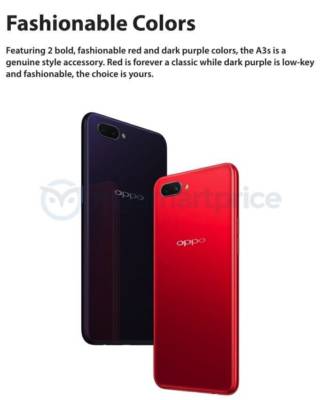 The device sports an aluminium alloy overall unibody and looks exquisite even from afar. At first glance, you won’t have a clue it’s a budget smartphone. There’s no rear fingerprint scanner in sight as well.

The only noteworthy feature at the rear is the dual rear camera which is in a horizontal position at the top left corner. The device measures 8.2 mm in thickness when you turn over to the sides and weighs 168g overall. It’s available in Red and Dark Purple. 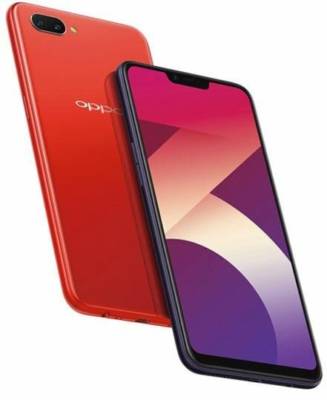 It has a 19:9 aspect ratio screen, coming with the trending notch display. This is perfect for those on a budget who wants to use a smartphone with a notch. The bottom chin came out to play as well.

It has a tall 6.2-inch HD+ IPS LCD capacitive touchscreen which the company calls FullView display. This has a resolution of 720 x 1520 pixels and 271 pixel per inch density. While the screen stretches up to 81.2% screen-to-body ratio.

Under the hood, the Snapdragon 450 chip brings along its 14nm process technology for improved power efficiency. It has an octa-core processor with Cortex-A53 architecture clocking at 1.5GHz max. While the Adreno 506 graphics card handles graphics.

While the RAM space is 2GB strong and should be enough for light users to multitask. For storing files, there’s a 16GB storage space available to accommodate all files and apps. You can expand up to 255GB as well, it runs on Android 8.1 Oreo out of the box with Oppo’s own Color OS 5.1 on top. 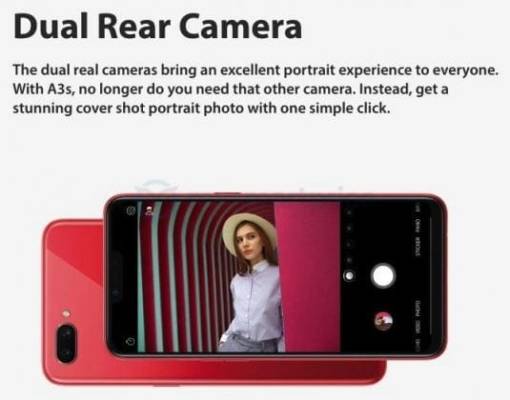 The A3s is equipped with dual 13MP + 2MP rear shooters. The first 13MP shooter by the left has f/2.2 aperture with auto focus, while the 2MP depth sensor has f/2.4 aperture. It has a LED flash and other features like touch focus, face detection, HDR and panorama. The 8MP selfie camera has f/2.2 aperture. 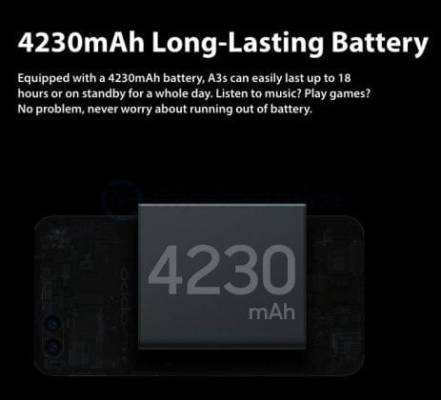 Powering the Oppo A3s is a 4230mAh non-removable Li-Ion battery with fast charging technology. With the fast charging feature, charging the battery from 0% to 100% shouldn’t take up to 2 hours.

What is Oppo A3s Price and Availability Status?