Isn’t it surprising how Oppo phones are now becoming exceedingly popular? Maybe it’s not. But it does show that they’re doing something right. Maybe the Oppo A77 device is part of what they are doing right. Before now, they have released other devices like Oppo R11.

Table of contents: show
1 OPPO A77 KEY SPECS
2 DESIGN
3 DISPLAY
4 PROCESSOR AND OS
5 INTERNAL STORAGE AND RAM
6 CAMERA
7 BATTERY
8 PRICE OF THE OPPO A77 DEVICE
9 Where to buy Oppo A77 and Pay on Delivery

The Oppo A77 device measures 153.3 x 75.9 x 7.4 mm. It also weighs 148 g which seems quite comfortable to be carried about. It comes in the Gold, Rose Gold and Black colour variants. Visibly, the device oozes beauty all around it. The rear of the device features a camera and a LED flash wisely located at the top left corner. While on the front, there’s a single button which houses the fingerprint sensor too. The front camera and flash were carefully placed on both sides of the call speaker.

Its screen size is pegged at 5.5 inches, which might require the attention of your two palms to use. On its screen resolution, it is pegged at 1080 x 1920 pixels. The ~401 ppi pixel density that comes with the device is just splendid. Be sure to enjoy the sight of very bright on-screen images and icons that would emanate.

The device runs on an Android operating system v7.1 (Nougat). It is also built on an Octa-core Qualcomm MSM8953 Snapdragon 625. Processor speed is pegged at 2.0 GHz.

For your storage of music, videos, documents and other files, there’s an available 64 GB. This space can be expanded to the tune of 256 GB with a micro SD card. But then, you would have to sacrifice your Sim 2 slot for this purpose. A 4 GB RAM is present to oversee the smooth running of applications on the device. 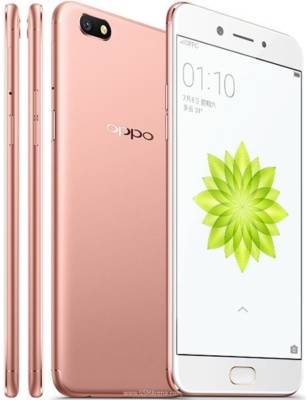 You rarely see front facing cameras with better quality than the rear? Well, you are about to see one. On the rear, you have a 13 MP camera which comes with a LED flash. Other features of the camera include Geo-tagging, touch focus, face detection, HDR and panorama. While on the front, the camera comes with a 16 MP quality. It’s been a long while I saw something like this. Phone makers Oppo tried in the camera department.

As its powerhouse, the device comes with a non-removable Li-Ion 3200 mAh battery. This is just a bit above our standard for the average smartphone user. Though, we’d still classify it as one made for the average user. Heavy users would do well if they look up to something bigger than this capacity.

PRICE OF THE OPPO A77 DEVICE

The price of the device is about 280 euros. The price of the Oppo A77 ranges from N90,000 to N105,000 in Nigeria. This would depend on your location in the country. We think the price is fair and would compete favourably with another device in its category.

Where to buy Oppo A77 and Pay on Delivery