Following the announcement of the latest Star Wars movie (Rogue One) which is set to go on screen, Softbank has launched a smartphone which is tied to the franchise. The Star Wars phone is made by Sharp Electronics, one of the biggest electronic companies which have been around for some time. The phone was launched in two colour variants; the Dark and Light side editions.

Some of the interesting features of the phones include Star Wars (the movie) themes and live wallpapers that will customise your phones to your favourite Star Wars movie character. The Sharp Star Wars phone also features a Star Wars movie app that allows you to watch The Force Awakens. The phones have high-end specifications such as a Snapdragon chipset, a fast processor and an impressive camera among other things. 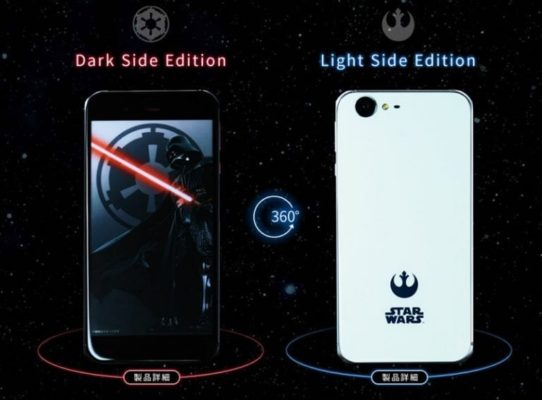 Apart from the Movie effects, the Star Wars smartphone comes with interesting features which will give other comparable smartphones a run for their money. Its rear panel has a coating that subtly changes colour with light.  It sports a 5.3-inch IPS LCD Capacitive Touchscreen with IGZO display technology, a resolution of 1920 * 1080 pixels (416 PPI pixel density), and it is protected using Corning Gorilla Glass 4.0.

The Sharp Star Wars smartphone measures 150 * 75 * 7 millimetres and has a body weight of about 155 grammes. It sports an impressive Qualcomm Snapdragon 820 chipset with a 2.2GHz Quad-core processor and an Adreno 530 GPU. It runs on Android 6.0 Marshmallow OS out of the box. The Star Wars phone features 3GB of RAM and an internal memory of 32GB that is expandable to 200GB via a microSD card slot.

As for photography, the Star Wars phone sports an impressive 22.6MP phase detection autofocus (PDAF) rear camera and a 5MP front shooting camera for photo-loving customers. It comes in Light and Dark options and packs a 3000mAh non-removable Li-Polymer battery to give the users a talk time of up to 13 hours and a standby time of 580 hours. It also has a fast charging feature.

The Sharp Star Wars smartphone has only been released in Japan and became available on the 2nd of December with a price tag of £700. However, the phone is yet to be available in Nigeria. If it does, you will get to know on this platform.