Late last night, Instagram social network users reported having difficulty accessing the application. Only on Android, the platform was closing unexpectedly. Now, the social network has decided to speak on the subject, talking about solving the problem.

According to Insta, the bug has already been resolved. However, if the problem persists, the social network recommends uninstalling the app and installing it again. In addition, there is already a new version available in the store to download. 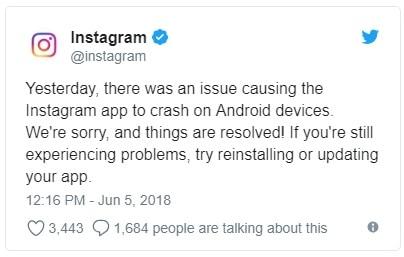 This type of error is rarely the case in applications as famous as Instagram, but sometimes it can happen. The stranger, in this case, was the fact that it happened out of nowhere. It was not through any update so to speak.

Remembering that the new version of the application is being released gradually for the entire user base. If it still does not appear to you in the top Android bar, visit the Instagram page in the Google apps store to see if it’s already available.