Android launchers have always been the go-to choice for Android phone owners who dislike the appearance of their home screen and want to customize it to their liking. Android launchers are popular majorly amongst users with devices running on stock Android OS – like the Nexus line of devices.

Top Best Launchers You Can Download On Your Android Device

On top of the best launchers, there is therefore Action Launcher 3 and this, for good reason. Source of customization for any smartphone, the addition of an application launcher like this that incorporates Quickpages, covers, …

Many other features are available that will improve the interface of your Android terminal. Action Launcher 3 allows several things. 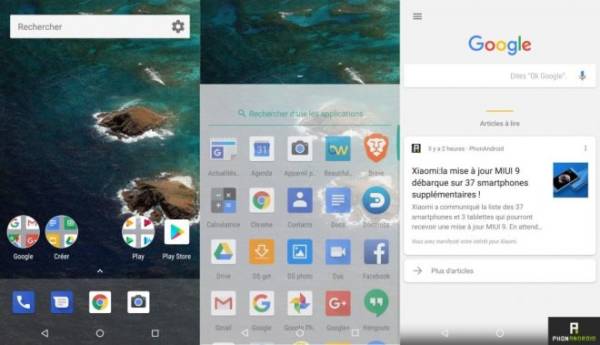 The latter is not yet available on the Play Store at the time of writing. You must go directly to this site to download it. Once you have downloaded the APK, simply install it.  Android One Launcher offers a very light and pure Android interface that goes straight to the point. A developer extracted the Launcher from an Android One smartphone, the Xiaomi Mi A1.

There are some differences with the Launcher available on Google Pixel smartphones, like the application menu which has a white background. We point out that the APK installation works perfectly even on non-rooted terminals. We hope that Google will make this launcher available directly in the Play Store. It is worth noting that the search giant still offers Google Now Launcher.

The Free Swipe function gives you direct access to the phone and system settings. Apus also includes a performance accelerator, a battery optimizer. One drawback, the ads are a little too invasive for some people. 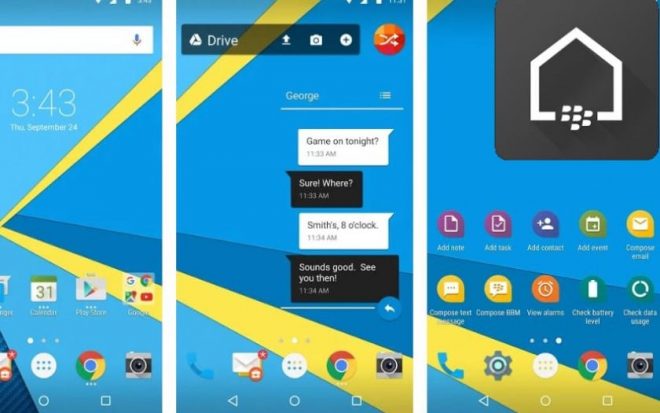 BlackBerry offers a launcher on the Play Store for smartphone users who do not have a brand device but still want to have an interface close to what the manufacturer offers on their terminals. 30 trial days are offered for free, advertisements will be added. You can get rid of it by making a small payment. Here are the key points of this interface: 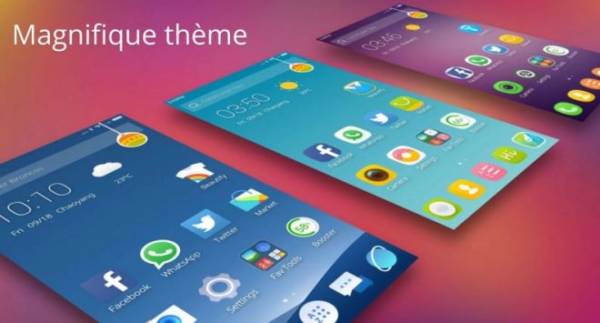 CM Launcher is developed by the same team as the excellent CM Security and the essential Clean Master. Lightweight weighs only 3 MB (that’s an advantage!) And it’s extremely fast. As for the proposed features, these are quite interesting. It is customizable and above all safe. It can block viruses and malware and protect your data and application data.

It also makes your Android smartphone more ergonomic by placing your apps in folders based on your habits. The kind of launcher that we would like to see by default on the constructors overlay, both for its fluidity and for its features that are still numerous and not necessarily found on all launchers. 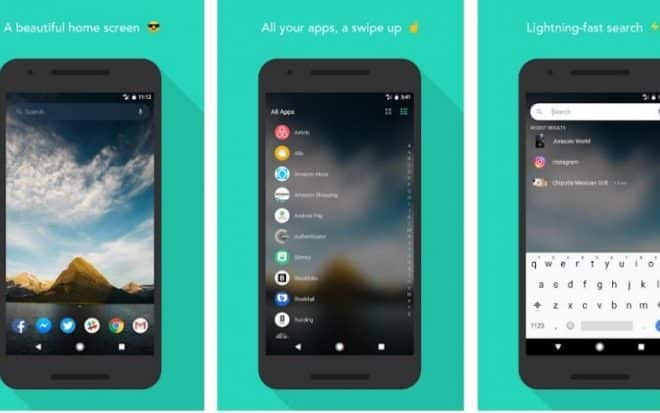 This launcher sports a minimalist design, just scroll up to view the applications, Evie also benefits from a fast search engine and offers a high level of customization through downloadable icon packages. 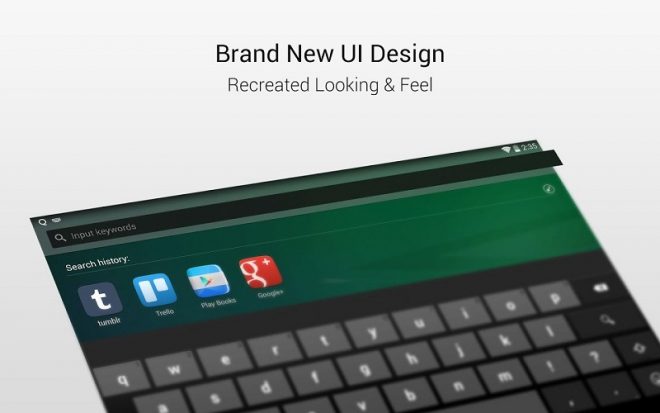 Go Launcher EX is the most famous and downloaded Android launcher. And for good reason, it’s the most complete of all and one of the most obvious to take in hand. It offers many themes, transition animations, lock screens … There is something for everyone and there is very little chance that you cannot find what you are looking for.

Go Launcher Ex matches particularly well with all versions of the operating system. It offers beautiful 3D effects. One of the main disadvantages is advertising. 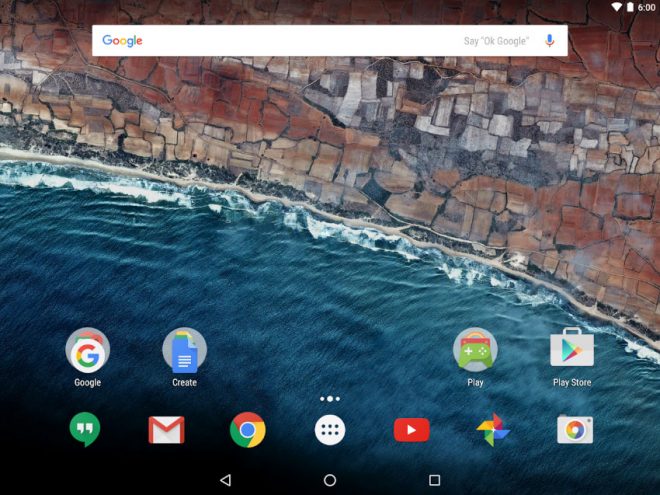 Google Now Launcher was released at the end of 2013 after being a success on the Nexus 5. With this Android launcher by definition, you get a minimalist and effective experience. Moreover, as the name indicates, the launcher integrates the Google Now experience, allowing you, in particular, to access the activation using the “OK, Google” command or on the various tabs with a simple touch of a finger. Brings an Android experience close to that of the Nexus.

Are you on Android but do you still like the look of the iPhone interface? We have what you need: this launcher emulates the appearance of the icons and gestures of iOS 13 included. The 3D Touch is present both on the real iPhone and on the way in which Apple smartphones present and store applications. This iOS Launcher supports add-ons, such as simulating Control Center, Assistive Touch or original wallpapers. 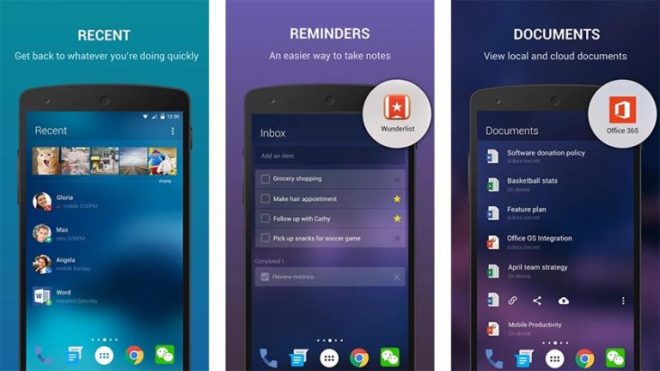 Testimony of Microsoft’s interest in Google’s operating system, Microsoft Launcher is a rather well-designed Android launcher that should delight all the maniacs of the organization. While the main screen lets you view your apps, you can also set up a multitude of home screens with your contacts, reminders, documents and the apps you use most. We recognize the legacy of Microsoft and its taste for the organization.

POCO Launcher – that of the Pocophone F1 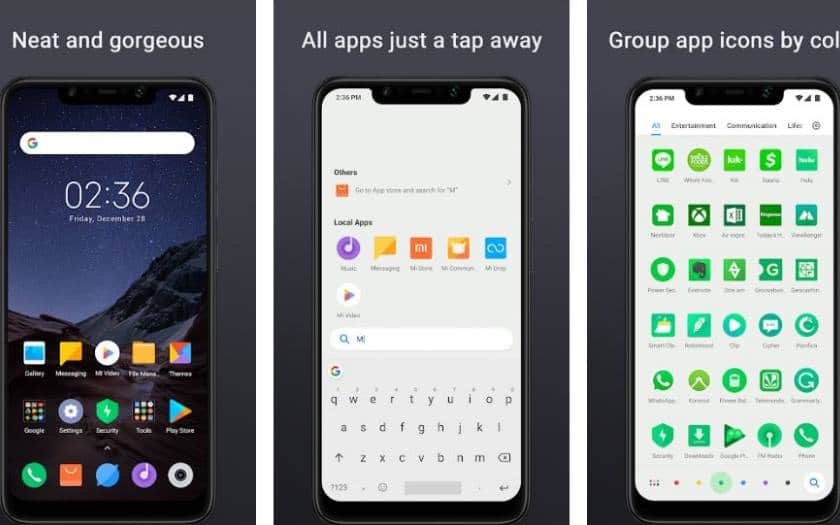 The new brand launched by Xiaomi has a different launcher than the one proposed on the MIUI smartphone. The Pocopohone F1, the first smartphone with a good value for money, has this launcher that will probably appeal to European users more because we notice the presence of an application menu and a more attractive appearance.

Millions of users have trusted him, which is reflected in his high Solo Launcher ratings. This launcher will be your faithful companion in the business of redesigning and customizing the classic Android interface that you are currently showing off. Very simple and fluid, the application is completely free but still allows you to enjoy great freedom of customization.

The SquareHome 2 launcher differs with a very personal interface that adopts squares like Windows Phone. The applications menu is examined and it is possible to select those to be displayed on the main desktop. So we can also count on help to start the application to stop and change some settings like effects, for example. A free version and another paid version are available on the Play Store.

The approach of  TSF Launcher 3D is a bit confusing at first. The 3D animations are numerous and give pepper to everything. We can position the icons as we see fit, the possibilities for interaction are almost endless. The publisher announces over 200 features, it is easy to manage this Launcher with one hand, as we can see in the video presentation. A Launcher to consider and we recommend you try. The app is available for free on the Play Store!

This is a fast and customizable launcher for Android devices; having a lot of features that make it truly powerful. It is no accident that this launcher has been among the best since it was first introduced to the Playstore.

It comes with several features that include:

For other features such as multiple configurable drawer tabs, you’ll need to upgrade to the PRO version for $3.99

When Microsoft first released their Arrow launcher, it was received with mixed reviews, but it has steadily risen to become one of the best launchers on Android. The launcher uses an algorithm that sorts your frequently used apps, contacts, and recent documents; placing them on your home screen. It might take you some time to set it up but it is fully customizable. You can get it for free on the Playstore.

This app organizes your apps into folders and offers the user several methods to customize the home screen. It can run on devices running Android 2.3 Gingerbread, which makes it to support a wide range of devices.

Our next launcher on the list is the Next launcher 3D Shell. This launcher is unique from the others as it offers 3D dynamic effects and a highly customizable home screen to the user. With real 3D home screen transition effects, efficient multiple apps management using gestures and so on, this launcher is just really amazing. It is free to download but would cost $16.99 to upgrade to a PRO version with additional features.

This is one of the oldest Android launchers just like the Apex launcher. It has not lost its relevance ever since and continues to be amongst the best. The launcher comes with a lot of features including gesture support, theme, customizations and so much more. It gives the user the ability to backup and restores the home screen layout when you move to a new device. The lite version is free but the PRO would cost you $4.00.

This is one really exceptional launcher coming with a lot of unique features. It uses a single homescreen app drawer and uses gestures to search for apps. Although the app is a small one in size, it is very stable and gentle on the battery. The app is free on the Playstore.

Next on the list comes the Solo launcher. The Solo launcher uses Material Design 2.0 providing the user with the latest options in design. With several customization options, you are free to make the launcher act and look how you want. It is would cost you nothing to get this fast and highly customizable launcher.

The Smart launcher Pro 3 uses a minimalistic design to make things easy for you; giving you quick access to your frequently used apps. This $3.92 and comes with no in-app purchases; in terms of device support, it requires your device to be running Android 2.2 Froyo or later. It is light on the battery and needs little system resources for its operation. Offering hundreds of downloadable themes and an icon pack support, this is one of the best Android launchers so far.

My final pick is Action Launcher 3. This launcher is a perfect replacement for the Google Now launcher which has being removed from the Playstore. It comes with more features than the Google Now Launcher such as a Quicktheme feature that enables you to customize your homescreen using a variety of wallpapers.

Although there are a plethora of Android launchers available on the Google Playstore, I have selected 10 of the best in this review. What do you think about the list? Did I miss anyone? Let me know what you think by leaving your comments in the comments box below.