Speaking about pioneering smartphone brands that spread the Android gospel throughout Nigeria, not mentioning Tecno Mobile would be a grave sin. The 11-year-old China based OEM has done really well in the Ngieria phone market by providing affordable devices of decent quality and improving on it over time with subsequent devices released year upon year. This has earned Tecno Mobile the love and trust of the Nigeria people and African people at large. Even overseas (with the Tecno i series and Tecno Camon CX Manchester City Limited Edition), the shine of Tecno Mobile is gradually blinding eyes and in no time, if Tecno does things right, will be compared to that of a diamond. 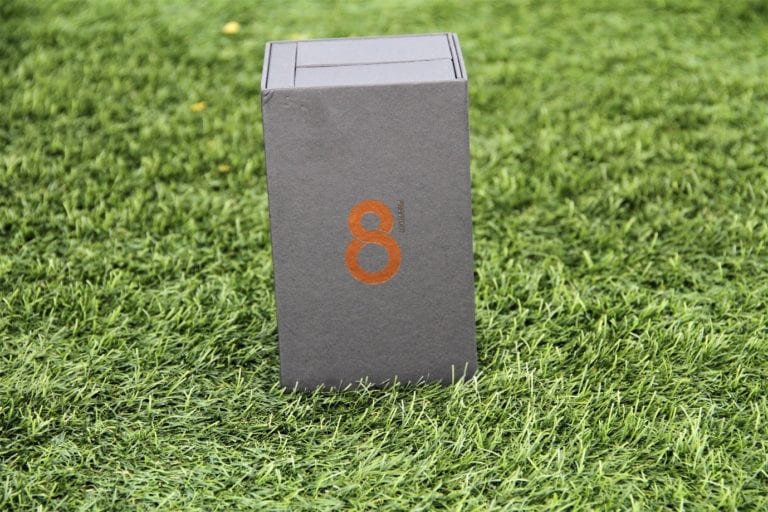 Talk about “doing things right”, the recently launched Tecno Phantom 8 by the OEM shows that Tecno Mobile is in the right direction to be a forced to be reckoned with in the nearest future. How soon that would happen is totally in Tecno’s hands and the kind of moves the company takes.

The Tecno Phantom 8 is the immediate successor to the Tecno Phantom 6 that was launched last year and seem to be the speculated Tecno Phantom 7 and Phantom 7 Plus that has been making rounds for a while now. The device was launched on Sunday, the 22nd day of October, 2017 after several days and weeks of teasers from the smartphone company. Before now, what we were only left to feed on were mere speculations and rumours but now that the device has been officially released, we will pass the Tecno Phantom 8 through a series of thorough breakdown and analysis under the headers below to see what the flagship is truly worth. Lets do some tearing down, shall we? 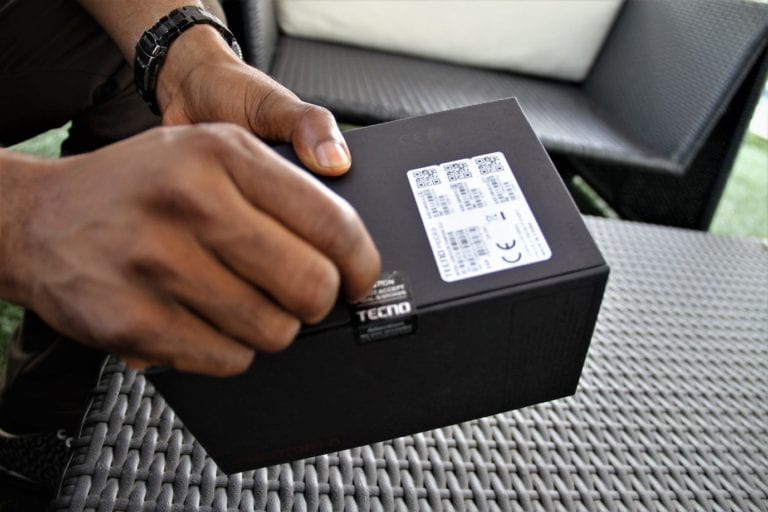 The design of the Tecno Phantom 8, for what it’s worth, is by far the most beautiful Phantom device I have seen Tecno Mobile manufacture. 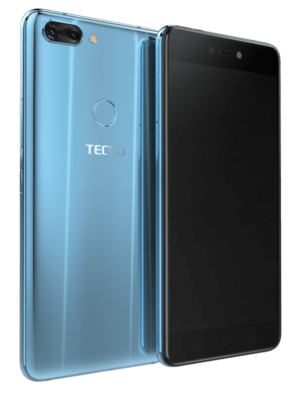 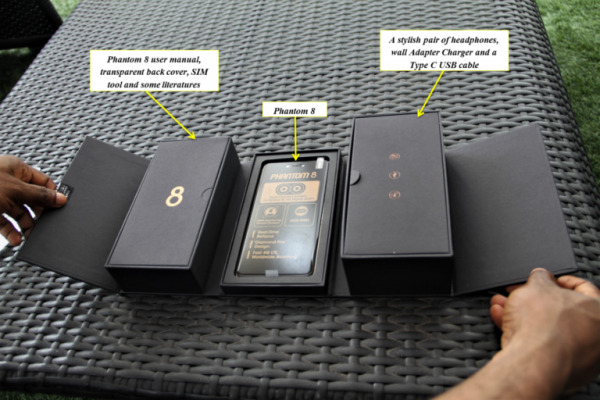 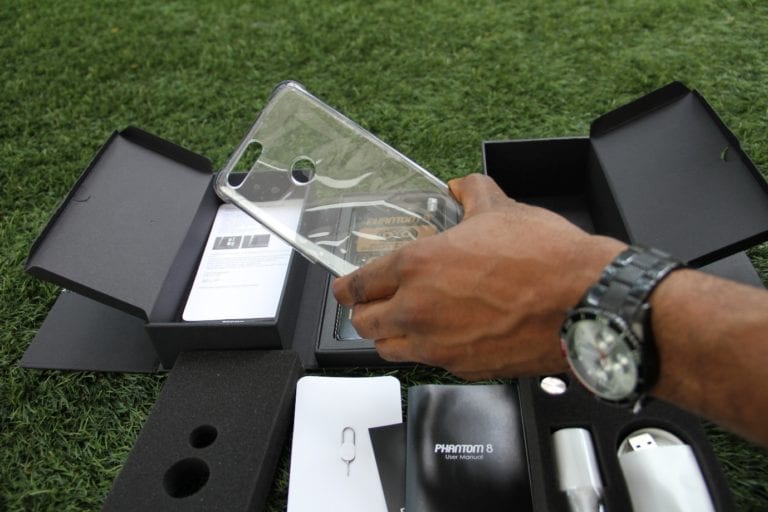 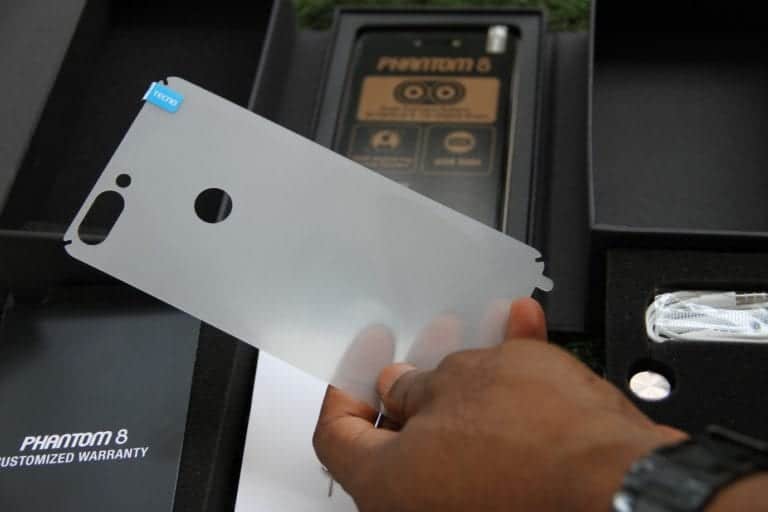 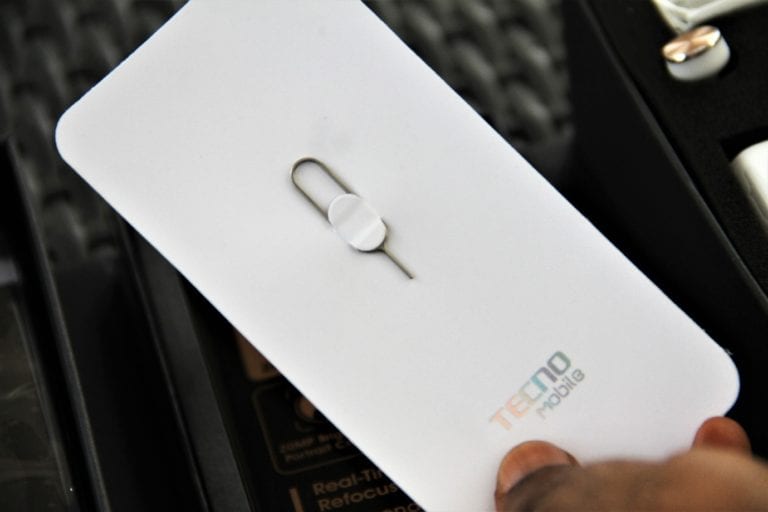 Like other smartphones in the Phatom series, the Tecno Phantom 6 and Phantom 6 Plus, the Tecno Phantom 8 also comes with a full metal body which helps to confer a premium look onto the device and bolster its level of attractiveness to a very large extent. While I for once thought the device will come with a 3D curved display like that on the Samsung Galaxy S6 Edge and Galaxy S7 Edge since Tecno had already employed the 2.5D curved edge display on the Tecno Camon CX (C10) and Camon CX Air but Tecno stuck with the 2.5D curved edge glass screen still. And it also further beautify the Phantom 8 smartphone. 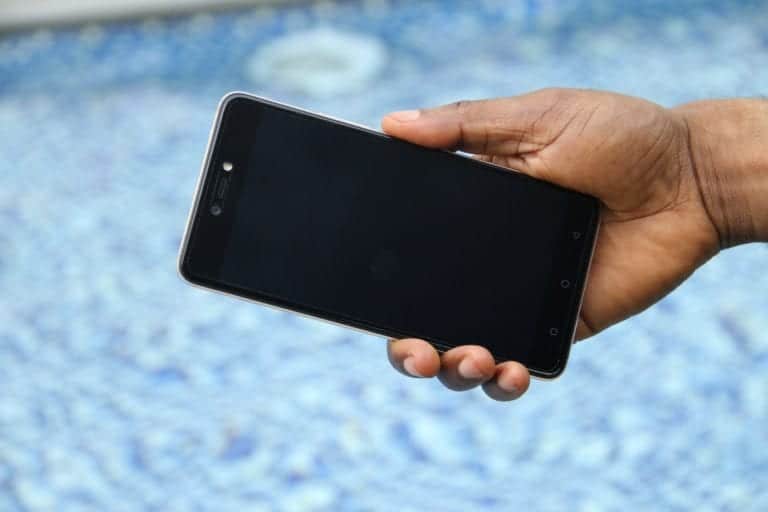 Another aspect of the device’s design that would mostly likely increase users/buyers love for the Tecno Phantom 8 is the device’s slimness. The Phantom 8 is only 7.9 mm thick and this puts it in the same league as top flagship smartphones of 2017 like the LG V30, LG G6, Xiaomi Mi Mix 2, Huawei Mate 10 Pro and more. It even get more interesting knowing that the Tecno Phantom 8 is slimmer than the Samsung Galaxy S8 (8 mm). Knowing how much majority of smartphone users and lovers cherish slim devices, I foresee the Phantom 8 doing really good in terms of sales. 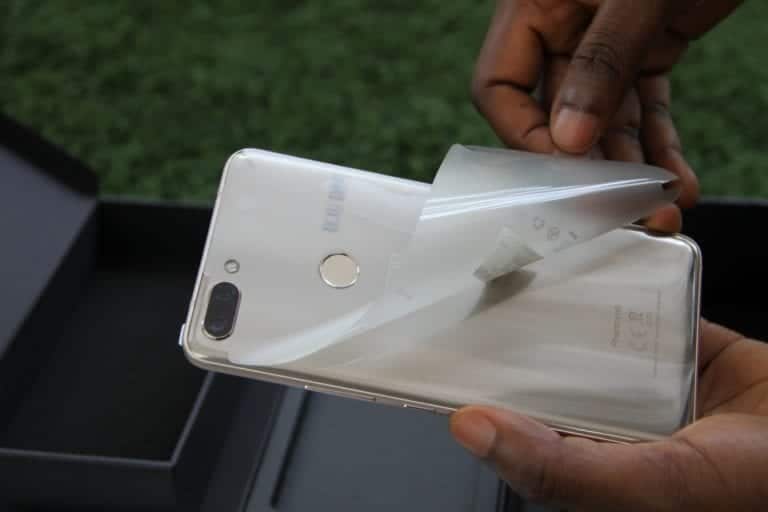 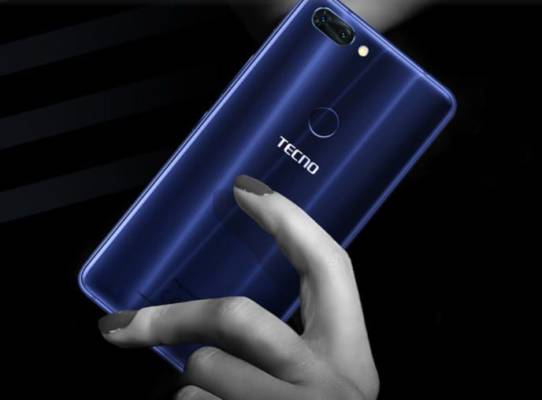 Taking a peek at the rear of the Tecno Phantom 8, the smooth and glossy back cover of the device kind of brings back memories of the Infinix Note 4. Though a shiny attribute of the rear is an impressive aesthetic gesture, but the fact that it retains fingerprints, dirt and stains could make it dull and less appealing after a long period of usage. 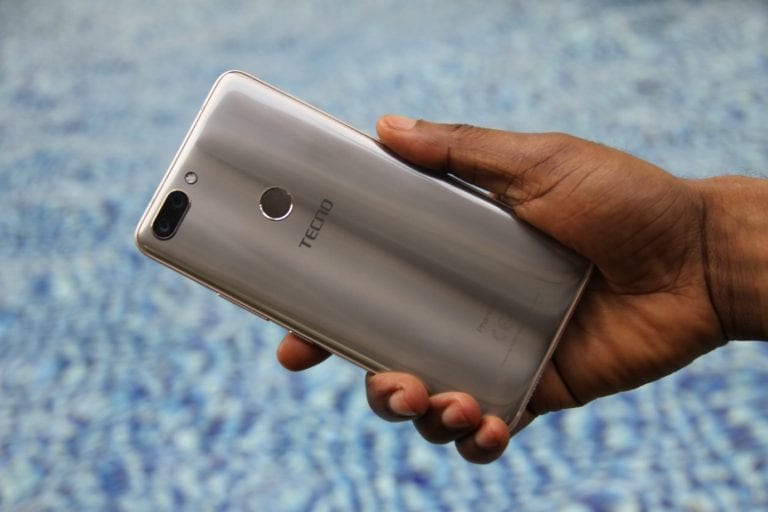 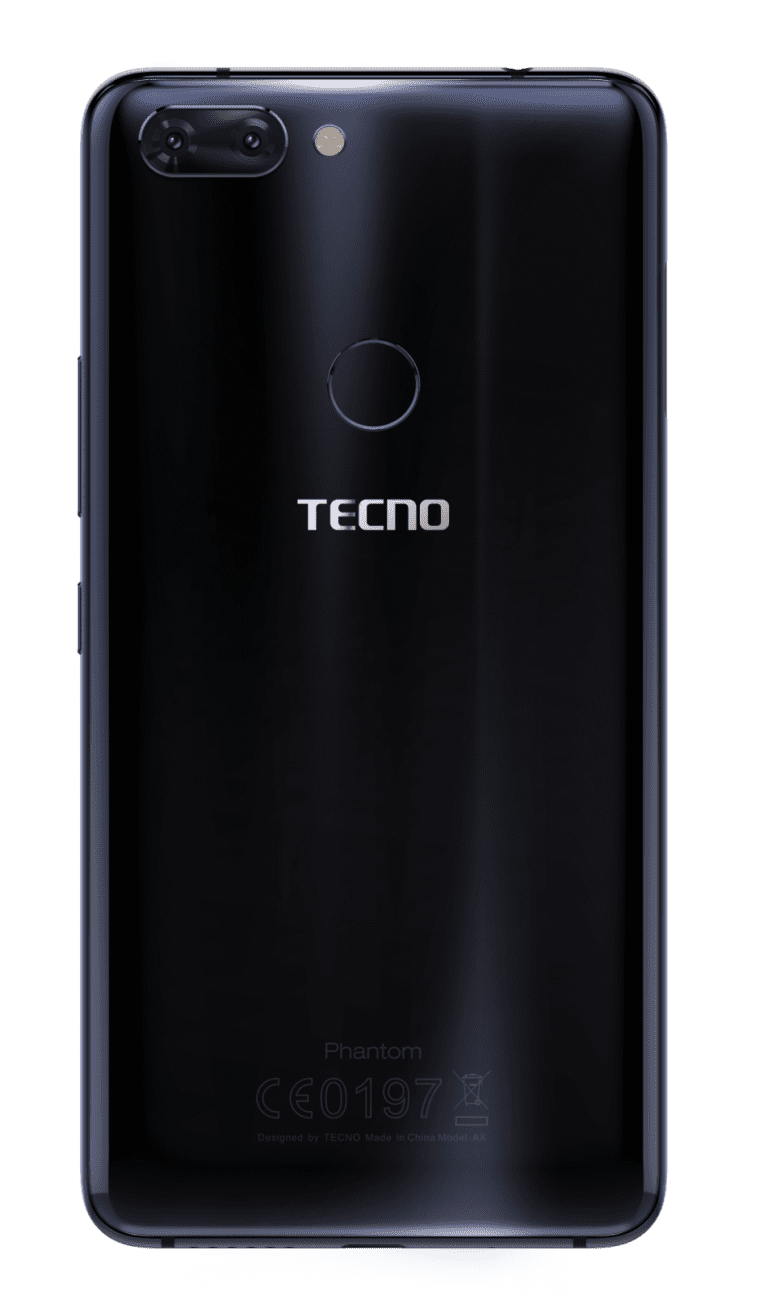 Placing the dual camera at the top left corner (as opposed to if it was in the middle) with the LED flash light to the right side of it gives more real estate on the rear for other components like the fingerprint sensor and the TECNO label imprint. 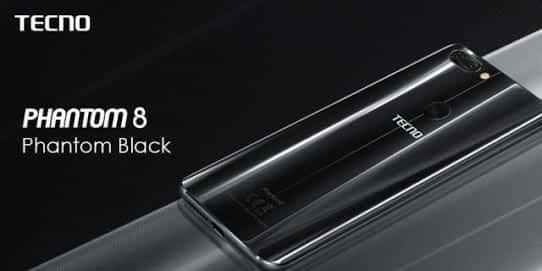 To even spice things up the more, the Tecno Phantom 8 is comes in three (3) colour variants – Champagne Gold, Phantom Black and Galaxy Blue. There is a very slim, slim chance that TECNO will produce any other colour option or version of the device but hey, we cannot totally rule out the possibility of that happening. Don’t you think? 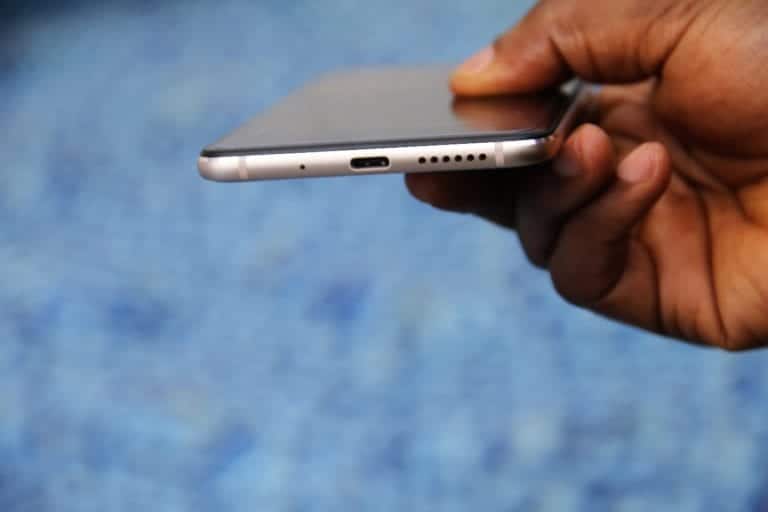 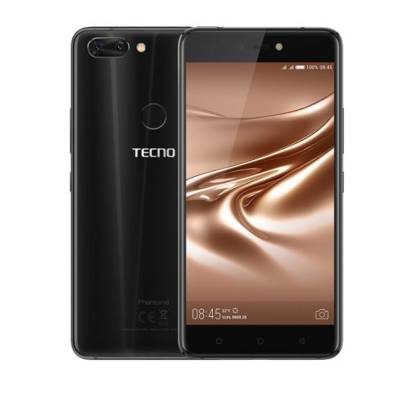 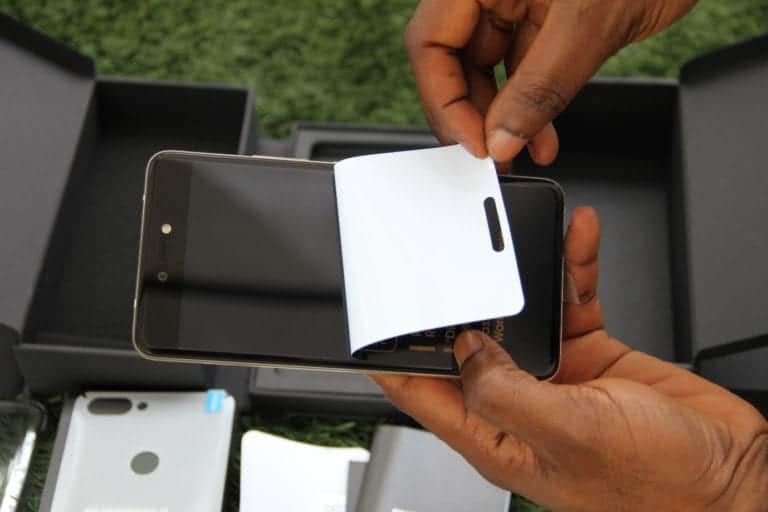 The size the Tecno Phantom 8’s screen comes in at the middle of that of the Phantom 6 (5.5 inches). The Phantom 8 comes with a 5.7 inches screen and a 1920 x 1080 pixels display resolution that is identical to that on the Phantom 8. 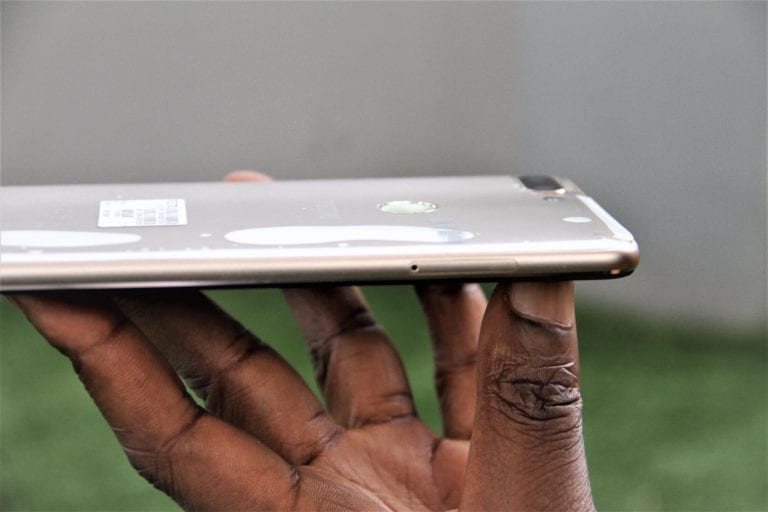 The screen is an IPS LCD capacitive touchscreen that display output in Full High Definition (FHD). So, be it when you are watching a movie, or you are surfing the internet, or using your favourite app, the best quality and crystal clear display output is assured.

On a side note, anyone following the smartphone scene very closely of late wouldn’t be oblivious of the one the latest trend hitting scene – the Bezel-less craze. Though the feature has no significant effect on the functionality of the device, it is more of an aesthetic thing that many smartphone manufacturer and users have embraced so far.

The TECNO Phantom 8 comes with a lot of bezels around the screen and a 75.1% screen-to-body ratio. Albeit when compared to other devices from Tecno in the past, the bezels on the Phantom 8 is a little thinner and it is really commendable but it leaves me wondering when TECNO will unveil her first Bezel-less Smartphone.

Still on the device’s screen, the TECNO Phantom 8 comes with one vital feature that further ups the its quality. Given the manner and intensity at which smartphone users handle their devices, the Corning Gorilla Glass protection (unspecified version) on the Phantom 8 comes in handy to protect the screen against breaking, cracking or shattering easily upon accidental or intentional fall against hard and rocky surfaces.

Below the screen (which occupies a huge chunk of the front real estate) are three capacitive soft-keys ; the minimizing/app switch key, the home button and the return/back button (from the left to the right respectively). The proximity sensor, secondary (selfie) camera and LED flash light are the inhabitants of the bezel on the top of the screen. 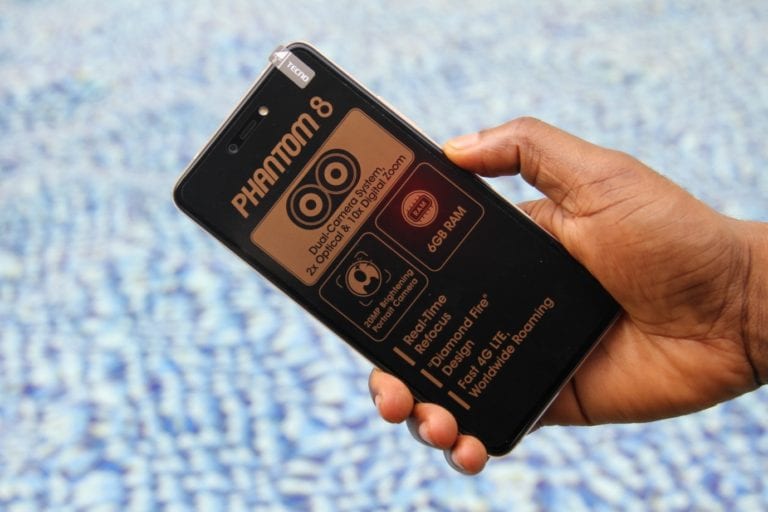 The Tecno Phantom 8 uses one of MediaTek’s latest System-on-Chip, the MediaTek Helio P25 processor which was launched on February 2017. This processor is mostly used on devices with dual cameras because it was specifically manufactured to provide the best of photographic experience and support. It also comes with advanced power saving technology and multimedia capabilities. 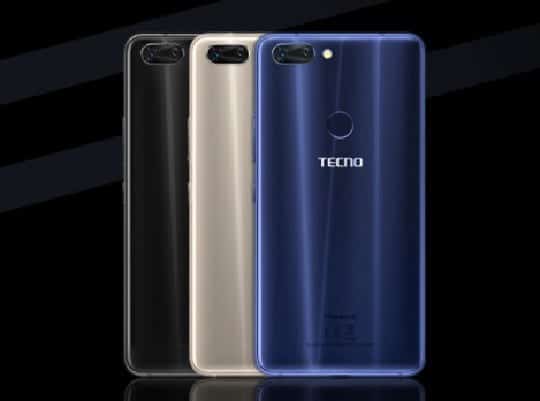 The chipset comes with Eight cores (Octa core) with each being a Cortex-A53 processor that runs at a fast speed between 2.5 GHz to 2.6 GHz.

Speaking of fast speed, the inherent 6GB of RAM embedded in the TECNO Phantom 8 will ensure smooth launching of apps and flawless multitasking. Definitely, TECNO is gradually metamorphosing into one beast of a smartphone brand.

The Tecno Phantom 8 has a built-in storage capacity of 64 GB. To me, 64 GB seem enough, but to those heavy Smartphone user that keep a lot of files, documents and multimedia on their devices, there is a dedicated Micro SD card slot for storage expansion to the tune of 2 Terabytes! That did make me go “WOW”!

Users of this smartphone will get to enjoy the numerous features of the Android v8.0 Oreo operating system which includes the adaptive notification dot, the Picture-in-Picture mode, efficient power saving and many other features. 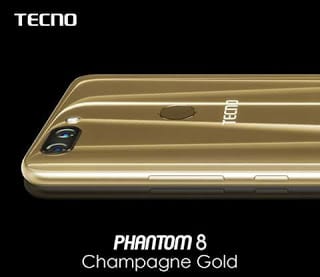 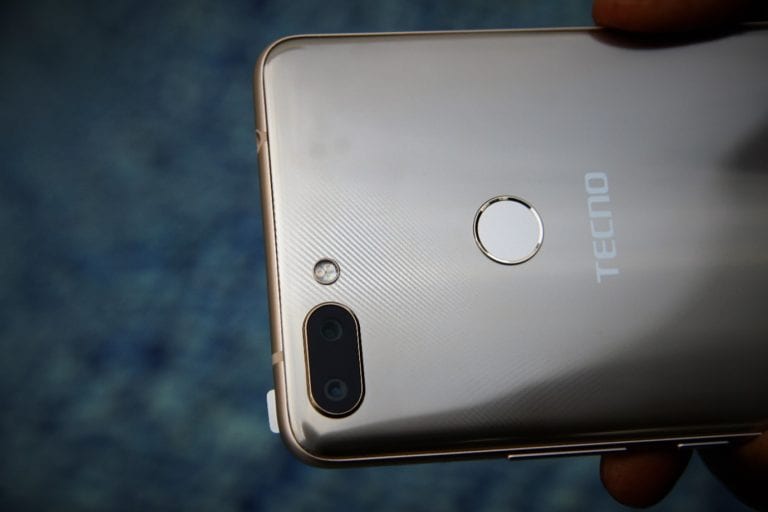 The Phantom 8 comes with a 12 MP and 13 MP camera combination on the rear and accompanied by a single LED flash light to the right. The shooters are Sony IMX 386 sensors which are newer generation sensors from SONY. The IMX 386 sensor is known to have a wide pixel size of 1.25 μm which takes in more light and produces nice images under both low and high light conditions.

The secondary (selfie) camera is an impressively high quality camera with a 20MP sensor. Perhaps TECNO is one of the smartphone brand that is not ignorant of the fact that the in this age and time, the front camera has become the mostly used camera in a smartphone given the upsurge in the number and use of available social media platforms. There is a smart dual soft selfie flash on the front which is just perfect for taking selfies in low light environment/in the dark (probably at night parties).

The TECNO Phantom 8 comes with a not-too-big and not-too-small capacity of 3,500 mAh. The battery cell is of the Lithium Ion type and it cannot be removed or replaced. The amount of time the battery can last depends largely on the intensity of usage but given that the device comes with the Quick Charge technology, you should worry less about how long your device lasts as you can easily get the Phantom 8 recharged on no time.

With the specifications and features highlighted above, one should not expect the TECNO Phantom 8 to come at a steal. However, the price is pretty decent, at about $380 – $400.

Click the respective links below to buy the TECNO Phantom 8 at the best prices.